Following four decades since the end of the Vietnam War, Vietnam’s relationship with the US has changed significantly.

After the Vietnam War in 1975, the US and Vietnam announced normal diplomatic relations on July 11, 1995. This year in July, the US and Vietnam commemorated 25 years of diplomatic relations – with the US congratulating Vietnam on its ASEAN chairmanship and reaffirming its support for Vietnam including peaceful resolution of disputes, rule of law, freedom of navigation, and unimpeded commerce among others.

Since formalizing diplomatic relations, the US and Vietnam have strengthened their relationship with bilateral trade increasing from US $450 million in 1994 to US $77 billion in 2019. The US had become Vietnam’s largest export market with Vietnam becoming the US’ quickest growing export market.

Vietnam launched major economic reforms known as ‘Doi Moi’ in 1986, prioritizing building a market economy and creating opportunities for private-sector competition. With a growing population, this presented a sizeable investment for international businesses. The US and Vietnam worked for several years negotiating a bilateral trade agreement, which came into force in 2001.

The deal helped lift several non-tariff barriers while lowering tariffs on a variety of goods on an average between three and 40% including on agricultural, animal products, and electronics. Vietnam was also granted the most favored nation (MFN) status, which was important to become a part of the World Trade Organization (WTO).

Former US President Barack Obama pushed for the Trans-Pacific Partnership (TPP) – a free trade agreement (FTA) involving ASEAN countries as well as the US and Australia. Vietnam was seen to be one of the biggest beneficiaries of this FTA, gaining access to the US market. However, all this came to a halt in 2017, when current US President Trump, disbanded the deal, claiming it would undermine US businesses and jobs.

Nevertheless, Vietnam and 10 other countries went ahead without the US and signed the Comprehensive Agreement for Trans-Pacific Partnership (CPTPP) in March 2018. Despite the setback, bilateral trade between the US and Vietnam has grown and analysts expect the trade relationship between the two countries to continue thriving.

Positive Relationship But Not Without Its Setbacks

Nevertheless, there are challenges. In 2019, Trump in an interview said that Vietnam was “almost the single worse abuser of everybody,” prompting concerns from investors that Vietnam’s favorable relationship with the US was over. Trump has also complained about the US trade imbalance with Vietnam. Vietnam’s trade surplus with the US had grown to US $600 million, according to a Bank of America Merrill Lynch study.

The US in May 2018 imposed duties on Vietnamese steel products that originated in China. Earlier in December 2017, the US imposed duties on steel products specifically on Vietnam that originated from China as they evaded anti-dumping rules. Most recently, on August 25 this year, the US Treasury Department determined that Vietnam manipulated its currency in 2019, possibly opening the door to tariffs.

Apart from this, the US has pointed to other barriers to trade including inadequate intellectual property protections and food safety regulations, restrictions on the internet and digital economy, and other governance issues.

In 2018, the USS Carl Vinson – a US Navy aircraft carrier – made a historic port of call in Vietnam. That same year, Vietnam also participated for the first time in the Rim of the Pacific (RIMPAC) – a maritime military exercise hosted biennially by the US. The US lifted a ban on legal arms sales to Vietnam in 2016; both countries have been forging closer military ties and high-level military exchanges.

For Vietnam, this has been to oppose China’s assertive stance in the region, particularly in the South China Sea. Building upon this relationship, Hanoi was also picked for the of the US-North Korea summit in February 2019, further cementing Vietnam’s stature on the world stage.

Alexander Vuving, an expert on Asia security at the US Defense Department Institute said that “Vietnam holds a key to the regional balance of power”. If this view is shared by the US, it will continue to have a positive and budding relationship with Vietnam, particularly if Vietnam is seen as a counter to China.

The trade dispute between the US and China has had a cascading effect on Vietnam. Vietnam’s exporters have seen an increasing demand for their products, especially garments and textiles. Vietnam has emerged as an alternative to China for investors benefitting from the China plus one strategy that involves investors shifting or expanding to other countries to increase market access.

It is important to note that this was already happening, but the trade war accelerated the process. Dustin Daugherty, Head of North American Desk for Dezan Shira & Associates says, “Even prior to the start of the US-China trade war and more recently the outbreak of the COVID-19 pandemic, Vietnam offered the most cost-competitive China alternative for general manufacturing in Asia.

Noted advantages such as a relatively efficient and stable governing structure, regulatory and some cultural familiarity for companies accustomed to doing business in China, highly competitive labor costs, business-friendly tax profile along with generous incentives, and proximity to pre-existing Asian supply chains all recommended Vietnam for foreign investors. These advantages have coupled with significant developments this year to further strengthen Vietnam’s competitive allure for FDI, especially for US business.”

Driven by rising labor costs, the need for diversification and the government’s focus shifting from labor-intensive sectors to high-tech industries, US firms operating in China have slowly shifted their manufacturing activities to Southeast Asia, especially Vietnam. 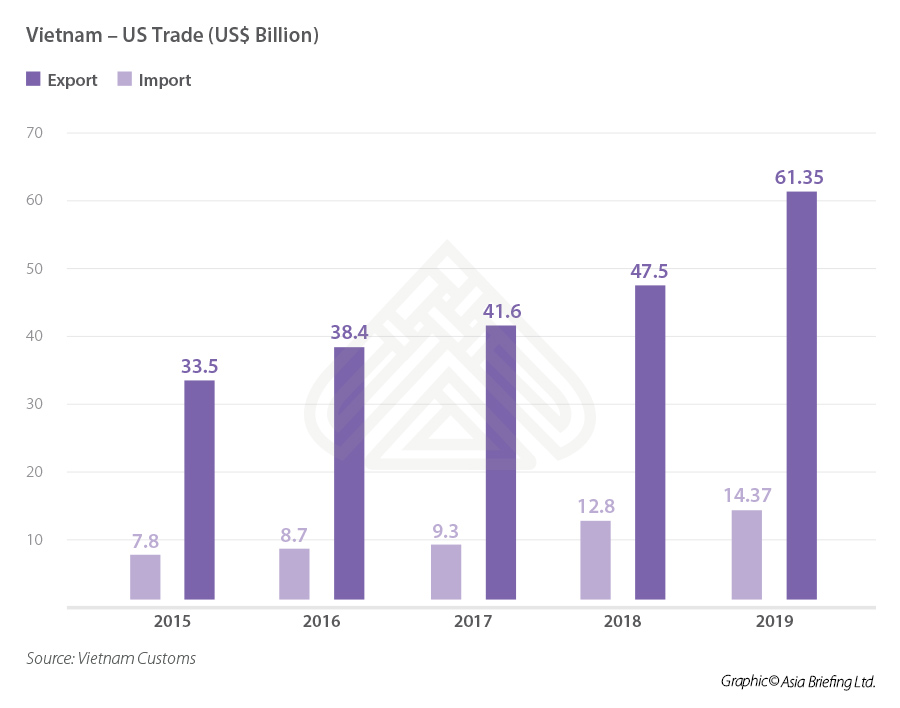 Due to its geographic proximity, lower wages, skilled labor, trade agreements, and regional connectivity, Vietnam has emerged as one of the most preferred alternatives for manufacturers. Major US firms such as Apple, Intel, Qualcomm, Universal Alloy Corporation (UAC), Nike, and Key Tronic EMS have already moved production lines to Vietnam due to costs associated with the trade war.

All these factors have helped increase trade between both countries since the normalization of diplomatic relations.

Top exports to the US from Vietnam include: 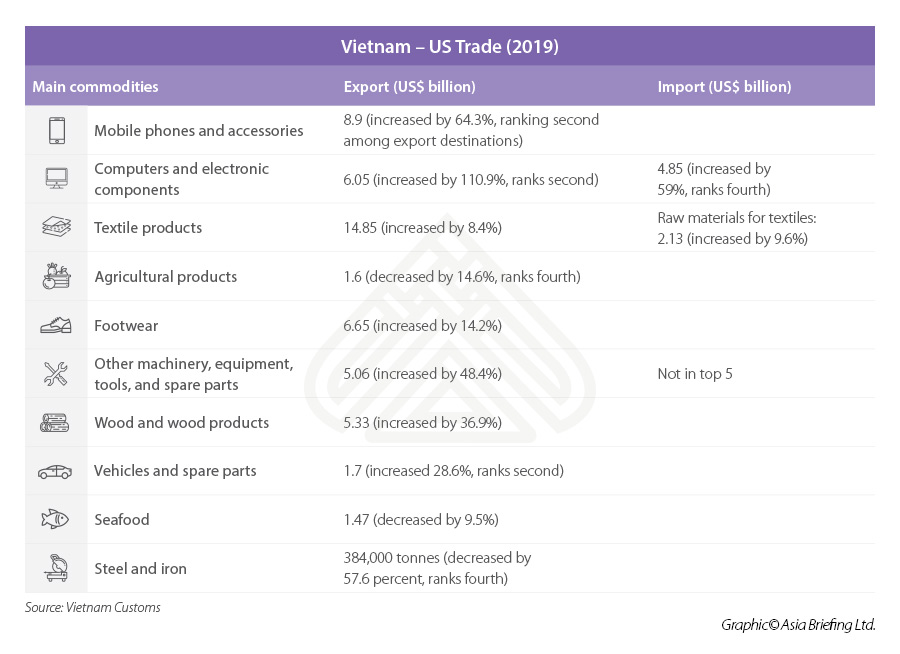 COVID-19 And FDI: How Has Vietnam Fared?

Vietnam has garnered international praise for its swift and effective response to the COVID-19 outbreak. Vietnam fought the pandemic early, closed its border to foreigners, and imposed social isolation measures on April 1. It lifted these measures on April 22, reopening its economy for business. A recent outbreak in Da Nang showed that Vietnam is not shy and imposed a lockdown on the city to get a grip on additional cases.

Although the country is not immune to the global economic downturn, its prospects for recovery remain positive and are the brightest among Asian countries. This view was also shared by the financial service firm UBS in a research note. In the first half of the year, Vietnam recorded 1.81 GDP growth. Despite being modest, these rates are encouraging considering that Vietnam is one of few countries that achieved positive net growth during the pandemic.

Vietnam’s control of the pandemic and its continued growth has further cemented its position as a safe business environment compared to others. And US businesses have noticed. Apple has planned to shift significant production of its products including its AirPods to Vietnam.

Even before the pandemic – furniture businesses such as US-based Lovesac and Wanek Furniture – affiliated to US supplier and retailer Ashley Home began moving production to Vietnam. US company Nike now makes most of its shoes in Vietnam while US tech giant Google plans to produce its Pixel smartphones from Vietnam instead of China.

Most recently, US chipmaker Intel, which has already invested US$1 billion in Vietnam is looking to increase its investment at Ho Chi Minh City’s Saigon Hi-Tech Park. Universal Alloy Corporation – a US-based global manufacturer of aircraft components for aircraft companies such as Boeing and Airbus, inaugurated its facility in Da Nang earlier this year.

All these factors make Vietnam a ‘trade war winner’ and an ideal place to do business and attract investment. Yet, Vietnam’s gains have not been contingent on deteriorating US-China ties alone. Vietnam’s skilled and low-cost labor force, infrastructure, stable government, safe environment, and free trade agreements are what US investors are looking for during this unpredictable time. This trend is likely to continue for the foreseeable future. And Vietnam is also well placed to capitalize on disrupted supply chains elsewhere due to the pandemic.

While the trade war and pandemic have created enough push factors to encourage manufacturing businesses to relocate, Vietnam’s great challenge now will be how to manage its growth sustainably.

Moreover, before sizing up Vietnam as a potential destination for relocation, US investors must do their due diligence and consider several factors, such as identifying a location, raw materials, sourcing partners, and supply chain logistics.