Why Singapore Is An Exciting Investment Destination For US Investors

Bilateral relations between Singapore and the United States stretch back to the 19th century with the US opening a consulate in 1836 when the island nation was still part of Straits Settlements of the British Empire.

Currently, Singapore is the US’ 17th largest trading partner with bilateral trade reaching US $57.8 billion in 2020 — the US has an estimated US $13.5 billion trade surplus. Also, more than 4,500 US companies are registered in Singapore, including Google, Apple, Microsoft, Procter & Gamble, and Pfizer, among others, making the US the largest foreign investor in Singapore (20% of all foreign investment into the country), with an estimated US $270 billion in direct investments.

Singapore presents continued opportunities for US businesses, particularly those eyeing expansion into ASEAN, of which Singapore is also a member (other members are Brunei, Cambodia, Indonesia, Laos, Malaysia, Myanmar, Philippines, Thailand, and Vietnam). The ASEAN region is set to become the world’s fourth-largest economy with a consumer market of US$4 trillion and a population of over 600 million.

US Seeking To Strengthen Partnerships With ASEAN

US vice president Kamala Harris visited Singapore in August 2021, as part of a whistle-stop tour that also included Vietnam. The aim was to increase diplomatic and economic ties in what is becoming one of the world’s most strategically important regions as the US seeks to counter China’s growing influence.

Harris’ visit involved agreements on cybersecurity, which included an accord on cooperation in cyberspace between the defense institutions of both countries. Further agreements were made on sharing best practices on data security, infrastructure protection, and the development of a new climate partnership.

Importantly, Harris extensively discussed supply chain resiliency and security within the context of pandemic management with Singapore’s prime minister Lee Hsien Loong. The Biden administration has been increasingly exploring the benefits of the China + 1 concept and how more investments in Southeast Asia could speed up assembly relocations from China. Singapore can provide the infrastructure and incentives for businesses to establish their regional HQ for expansion into ASEAN.

US-Singapore economic ties run deep, particularly after a free trade agreement (FTA) was signed in 2004 — the first US FTA in Asia — US multinationals alone employ over 200,000 Singaporeans while approximately 36,000 Americans are employed in Singapore.

More recently, in October 2021, both countries signed a memorandum of understanding (MoU) to implement the US-Singapore Partnership for Growth and Innovation agreement. This partnership aims to establish a vehicle to deepen economic integration, starting with four pillar areas: energy and environmental technologies, digital economy, advanced manufacturing, and healthcare.

What Sectors Should US Companies Invest In?

Manufacturing is by far the largest industry in Singapore, contributing to between 25% and 30% of annual GDP. It was in the 1980s when the country moved from low-value-added production to high value-added products, such as biomedical manufacturing, precision engineering, chemicals, medical devices, pharmaceuticals, and aerospace, among others. Singapore is already the third-largest global exporter of high-tech goods, the fifth largest producer of refined oil, and produces four of the world’s top 10 drugs.

Singapore is eager to attract companies at the frontier of manufacturing and has established a 10-year plan to grow the manufacturing sector by 50% by 2030.

Singapore’s pharmaceutical and biomedical sectors are fast-becoming leading drivers of economic growth not only for the country’s healthcare industry but also its manufacturing sector.

German biotechnology company BioNTech, which developed the COVID-19 vaccine —BNT162b2 — with American pharmaceutical firm Pfizer, will establish its Asia-Pacific regional headquarters in Singapore, where it will also set up an mRNA manufacturing facility. The facility will produce several hundreds of millions of mRNA vaccine doses per year, boosting BioNTech’s capacities for vaccines and therapeutics for cancer and infectious diseases. More importantly, it will help build a rapid-response production capability to address the threat of future pandemic threats in the Asia-Pacific region and open the company to a dynamic marketplace with a population of 655 million.

Singapore is a critical manufacturing base for medical devices for global markets. The country has a strong presence of over 25 research and development centers and a local pool of over 3,000 medtech startups. Moreover, Singapore produces 60% of the world’s microarrays and one-third of the world’s thermal cyclers and mass spectrometers. The Asia medical technology market is predicted to overtake Europe as the second-largest regional market for medical devices by 2023, contributing to 35% of incremental growth.

Investors are attracted by Singapore’s strong base for research and innovation for new business models in healthcare, such as the use of big data to provide better patient-centric care. This, in turn, provides medtech companies with the capabilities to export their products or services to go-to-markets in ASEAN as well as Asia.

The electronics sector accounts for some eight percent of Singapore’s GDP with several world’s largest semiconductor and assembly and test companies having manufacturing facilities in the country. Beyond semiconductors, Singapore plays a vital role in the global supply chain for microelectromechanical systems (MEMS), and memory products, among others. Singapore also trains over 13,000 engineers and technicians annually, ensuring businesses have a continuous supply of skilled talent to drive their efforts into new markets.

Singapore’s efficient business environment is demonstrated by the ease with which foreign investors can incorporate a business in the country. Registering a company can take as little as one day provided all the files are in order.

The private company limited by shares, commonly known as a private limited company, is the most preferred type of entity among foreign investors in Singapore. This entity is the most flexible, advanced, and scalable type of business form.

There are some key characteristics of a private limited company that makes them an attractive option for foreign investors:

A Separate Legal Entity - the private limited company is a legal identity and separate from its shareholders and directors. Furthermore, this entity can also acquire assets, enter contracts, or enter debts in its own name.

Foreign Ownership - this entity can be 100% foreign-owned.

Tax Benefits And Incentives - a Singapore private limited company is eligible for various tax incentives. For instance, the corporate tax rate of 17% is effective only for chargeable income above S $200,000 (US $147,000) with a 50% exemption on the next S $190,000 (US $139,000) of chargeable income. Furthermore, there is no capital gains tax.

Singapore has one of the world’s most extensive DTA networks, attracting international businesses from a multitude of conventional and nuanced industries.  The country has signed over 90 DTAs, which comprise three types: comprehensive, limited, and exchange of information arrangements (EOIAs).

Comprehensive DTAs provide relief from double tax for all income types between the two signatories. Limited DTAs, however, only provide relief from income generated from air transport and shipping, and EOIAs are provisions for the exchange of tax information.

The tax reliefs under each DTA treaty differ for each country. They normally cover several income types:

The country’s bilateral and regional FTAs include some of the largest combined trade agreements in the ASEAN-China, ASEAN-India, and ASEAN-Hong Kong trade blocs — providing Singapore-based businesses with access to preferential markets, free or reduced import tariffs, as well as enhanced intellectual property regulations. 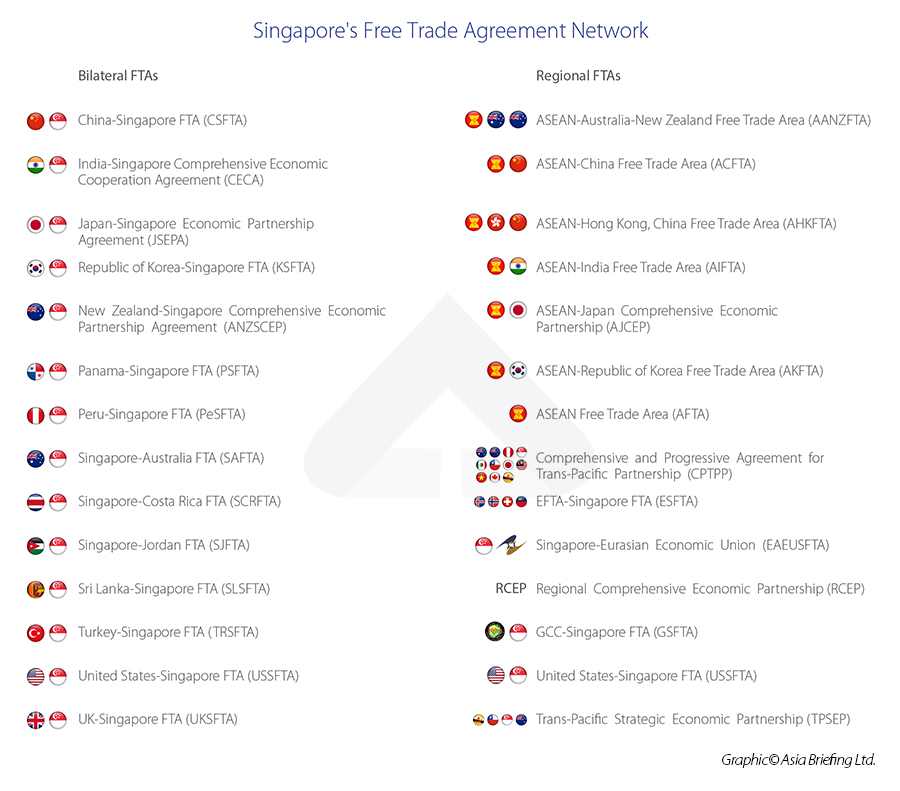