What Is China’s Green And Low-Carbon Plan And Why Is It Relevant To Foreign Investors?

After decades of breakneck economic growth, China is making it a priority to develop a green, low-carbon, and circular economy in coming decades. Continuing along the same growth track would have been unsustainable and inefficient – an assessment that is backed by top policymakers. In February 2021, the State Council released a guiding opinion outlining the transition plan for how China will initially form the production system, circulation system, and consumption system featuring green, low-carbon, and recycling development by 2025 and fundamentally improve the ecological environment to achieve the goal of “beautiful China” by 2035.

Accomplishing these goals require serious social and economic transformation. China emits over 25 percent of the world’s greenhouse gases and has more installed coal capacity than the rest of the world combined. It is inevitable that a green and low-carbon transition in the country will impact all types of market players. In this article, we provide an overview of China’s plans and the paths it has identified to secure a green economy and explain their relevance to foreign investors.

What Is China’s Green And Low-carbon Plan?

In his video address to the UN General Assembly on September 21, 2020, President Xi Jinping announced China’s intentions to expedite its voluntary carbon emissions reduction targets ahead of its pre-existing commitments and strive to reach peak carbon emissions by 2030 and carbon neutrality by 2060.

In the run-up to the COP26 summit in early November 2021, China released two key policy documents, further cementing its decarbonization commitments. The two documents, titled the Working Guidance for Carbon Dioxide Peaking and Carbon Neutrality in Full and Faithful Implementation of the New Development Philosophy (“Working Guidance”) and the Action Plan for Reaching Carbon Dioxide Peak Before 2030 (“Action Plan”) also form the basis of China’s climate policy framework for reaching its carbon reduction targets, known as the “1+N” policy framework.

The “1” part of the policy framework refers to the Working Guidance, which acts as the country’s overarching guiding principles for reaching its climate goals, while the “N” stands for an unspecified number of auxiliary policy documents targeting specific industries, regions, fields, and goals. The Action Plan is the first and most important “N” document that has been released.

Both the Working Guidance and the Action Plan are “top-level design documents” that will collectively guide China’s decarbonization efforts. But the Action Plan goes far beyond topline goals – it provides an extensive overview of the areas of China’s economy that will gradually be reduced or shifted to sustainable energy and methods, including heavy industry, agriculture, transportation, and the circular economy. 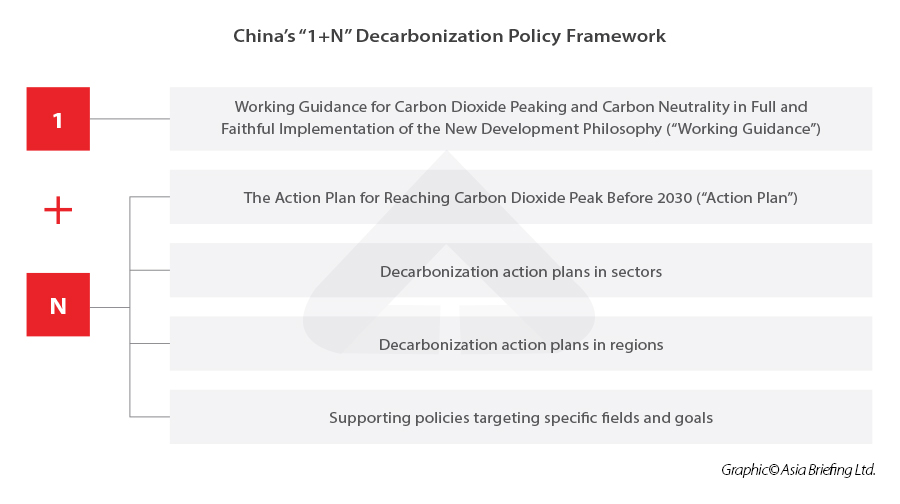 China’s Broader Plan For A Green, Low-carbon, And Circular Economy

Other than working points related to carbon reduction, the Guiding Opinion pays attention to the efficient use of resources other than energy and their discharge of pollutants as well as the general development of the environmental protection industry. Some examples are stated below.

For Water Resources, The Guiding Opinion Proposes To:

For Pollutant Discharge, The Guiding Opinion Proposes To:

To achieve these goals, the Guiding Opinion suggests that China must first make breakthroughs in key areas, such as conservation and environmental protection, clean production, and clean energy, before comprehensively driving the green upgradation of its primary, secondary, and tertiary industries and infrastructure. Also, emphasis is laden on the importance of innovation and the market’s guiding role, indicating that green tech and private entities will be expected to play an important part in China’s green transition. 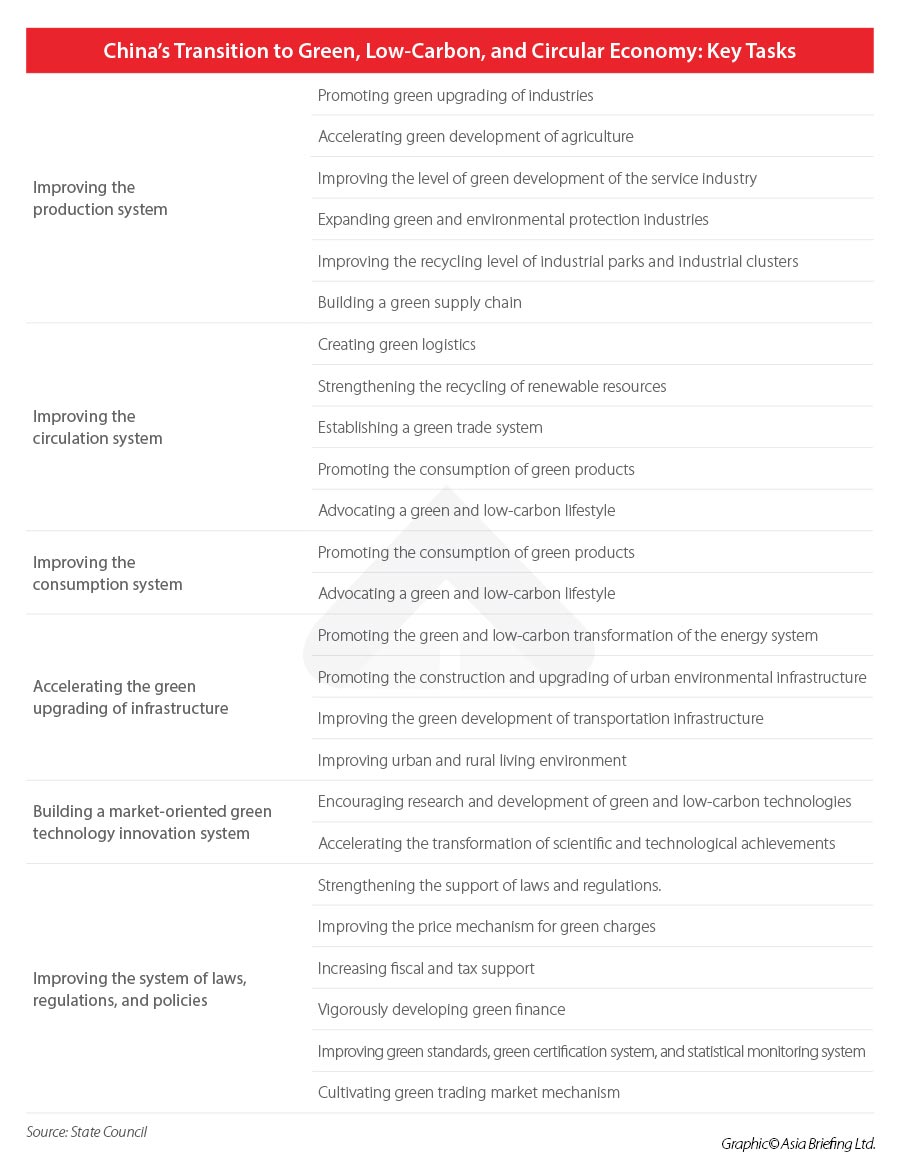 How To Understand China’s Current Progress On Green Transition?

China has been investing heavily in renewable energy over the past decade. According to the National Energy Administration (NEA), China’s installed renewable energy capacity reached 1063 gigawatts (GW) in 2021, accounting for 44.8 percent of China’s total power generation capacity. However, it is important to note that “capacity” refers to the maximum level of electrical power that can be produced in the country, not the total amount of electrical power that has been generated. This figure is useful to gauge the energy generation potential of the country but does not show the actual amount of energy that has been generated from renewables. In terms of electricity generation, renewables account for a smaller proportion, reaching 2.48 trillion kWh in 2021, equivalent to 29.9 percent of total electricity use that year. 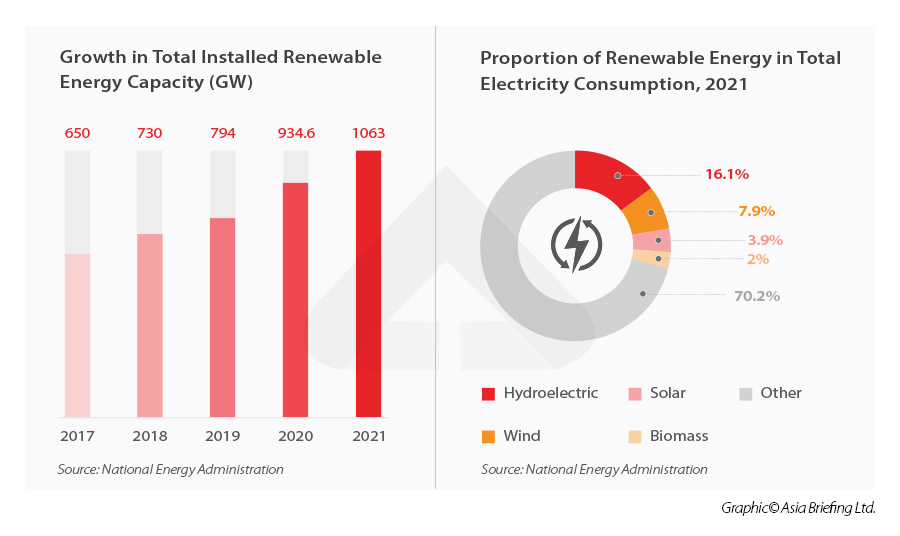 The majority of China’s power supply thus still comes from fossil fuel sources. According to data from the National Bureau of Statistics (NBS), in 2021, China’s consumption of coal increased 4.6 percent year-over-year and accounted for 56 percent of total energy consumption. Also, new domestic coal-fired power plants were green lit as recently as February 2022. In April, the State Council confirmed China would increase its coal output in 2022 to 300 million tons, up from 220 million tons in 2021.

If Coal Consumption Is Back, How Can We Trust China’s Climate Action Pledges?

While the renewed dependence on coal is contradictory to China’s pledges to decarbonize its economy, the country realizes that a peak consumption point will be reached before it stabilizes enough to implement radical targets. Energy security is, after all, the basis for China’s economic and social development.

This fact was made evident by some of the worst power shortages experienced in the country in the fall of 2021, leading to rolling blackouts in urban areas and forcing the closure of factories in parts of the country. The power crunch was blamed on a combination of factors, including an increase in demand and a cut to coal production in response to policies to reduce energy intensity. The shortage came as a considerable shock to the country. Cut to 2022, when multiple COVID-19 outbreaks across China have triggered strict lockdowns in some of the country’s largest economic centers. External factors, such as continued supply chain bottlenecks, high commodity prices, and geopolitical instability following the breakout of the Russia-Ukraine war in late February, are also weighing heavily on the minds of Chinese policymakers. Another power crunch of the kind seen in 2021 would therefore be disastrous for China’s economy.

2022 is also a pivotal year for the government as it prepares for the upcoming 20th National Congress of the CCP in the latter half of the year. In the run-up to this event, economic and social stability will be paramount. As a result, government officials repeatedly stress the importance of ensuring a stable energy supply and place energy security as a top priority for the year.

Does This Mean That China Could Go Back On Its Green And Low-carbon Commitments?

The short answer is no. During the Two Sessions in 2022, President Xi stated, “Green transformation is a process, and not something that can be accomplished overnight” and decarbonization should be “not too fast, not too slow, steady and sure”. The current increase in coal production and consumption is a response to short-term issues of energy supply, and as other energy sources catch up, China’s coal consumption will reduce.

Till then, policymakers will release more policies and regulations aimed at reducing carbon emissions in specific areas of the economy and roll out more incentives to encourage the participation of private capital in the country’s green transition.

Bearing that in mind and given the difficulty of immediately reducing the reliance on fossil fuels, China is expected to enhance green and low-carbon transition in other fields to compensate. This includes improving the carbon emission measurement method, developing the carbon trading market, more emphasis on green compliance, and encouraging the development of green technologies, such as energy conservation and emission reduction technologies.

What Are The Implications For Foreign Investors?

China’s transition to a green, low-carbon, and circular economy is an immense task that will have far-reaching influence on the whole society, especially on all kinds of market players whose economic behaviors are directly related to China’s plans for tackling climate change and environmental degradation.

For the purpose of this article, we summarize the implications of China’s green and low-carbon transition for foreign investment into three aspects.

While the transition towards green development may add burdens to some businesses regarding green compliance and the green transformation of their operations and supply chains, it also opens the door for new opportunities.

As estimated by Goldman Sachs, there will be a US$16 trillion investment opportunity on China’s path to carbon neutrality by 2060. And China’s market for green goods and services will be the largest in the world, presenting a US$1 trillion opportunity.

Although Chinese companies dominate the global market share in many of these areas, they are not always strong in innovation and advanced technologies. This leaves a big space for foreign companies to enter, as innovation and technology are essential to China’s green transition, especially given China’s difficulties to change its energy structure in the short term.

On the other hand, the Chinese government has been gradually removing subsidies on renewable energy sources, new energy vehicles, and other green industry areas to even the playing field between domestic and foreign companies – thereby making quality the bigger factor in competitiveness. In the absence of subsidies, China is developing a green bond market to finance the industry, which will further facilitate the access of foreign capital into China’s sizeable – and politically imperative – green market.

As China steps up its efforts to decrease emissions and transfer to a greener economy, companies operating in the country will be under greater pressure to reduce their carbon footprints across their value chains and be more efficient in environment protection.

Foreign businesses operating in traditional sectors may also need to thoroughly and systematically upgrade their existing operations and supply chains to perform better on energy saving, pollution control, and resource recycling, among others. Advanced technologies and management will play a key role in this process.

Whereas the greening of traditional sectors does seem costly, a lot of new green technologies and management techniques are set to improve operational competitiveness and profitability. Many energy-efficient investments are also cost-effective and yield high economic returns. Additionally, these transitions could have a brand impact with green consumption influencing new consumer trends. Products and services from businesses with greener supply chains and operations will be viewed more positively in the market.

With China adding more environmental laws, regulations, standards, and other requirements to its green and low-carbon framework, green compliance will become more important for businesses operating here. For example, on December 18, 2021, China’s Ministry of Ecology and Environment (MEE) issued the Measures for the Administration of Legal Disclosure of Enterprise Environmental Information (the Measures), which came into effect on February 8, 2022.

The Measures strengthen China’s reporting requirements on environmental, social, and governance (ESG) by mandating major polluters and the companies that finance them to submit annual reports providing a range of environmental information. Moreover, the Measures enhance their implementation scope by making ESG compliance relevant to a company’s corporate credit score, the fluctuation of which is more damaging to large companies than monetary fines.

This demonstrates the trends for green compliance in China – standards will be stricter and their monitoring will be more consistent. Businesses operating in China are advised to keep a close eye on the rollout of China’s green compliance requirements and make necessary preparations in advance.