On October 1, authorities in Ho Chi Minh City, the commercial hub of the country, eased curbs and lifted social distancing measures allowing several business activities including, offices, industrial parks, and factories to resume, albeit with capacity restrictions. This was the first time after 90 plus days of social distancing including a ‘shelter-in-place’ style lockdown where residents were allowed to go out. The mood was positive with residents and businesses alike expressing relief but also some anxiety as Ho Chi Minh City’s streets starting filling with traffic and the sound of the ubiquitous motorbike after months of silence and desertedness.

The lifting of curbs was also implemented in the provinces neighboring Ho Chi Minh City such as Dong Nai and Binh Duong as well as the Mekong Delta, which contain several factories and production hubs making goods for western markets.

Hanoi and surrounding provinces in the North also underwent a lockdown, but they were not as badly affected as pandemic hotspot Ho Chi Minh City and resumed business activities from September 21.

As businesses resumed activities, there were testing requirements and some restrictions; some rules were unclear which posed additional challenges to businesses as they tried to resume operations. However, businesses were able to decipher the rules as time went and as more clarification was provided.

Vietnam’s reopening comes after a significant shift of the government’s strategy to ‘living with the virus safely’ rather than a ‘zero-covid’ approach. While Vietnam won plaudits for containing the pandemic in 2020, the Delta variant proved overwhelming with traditional mitigation measures proving ineffective to contain the increasing numbers of cases caused by the pandemic.

What’s Open And What’s Not

Almost all business activities have been allowed to reopen with pandemic prevention measures. These include offices, industrial parks, export processing zones, high-tech parks, barbershops, museums, weddings, supermarkets, convenience stores, restaurants, public transport (taxis, ride-hailing, and buses), and flights. Businesses that are not allowed to reopen include bars, spas, karaoke and massage parlors, movie theaters, nightclubs, and in-person dining though these may differ in different regions.

While there are some variations throughout the country most businesses require employees to have at least one dose of a COVID-19 vaccine to return to offices. Businesses are also required to test their employees every seven days. Residents in Ho Chi Minh City have been asked to use the VNEID and Y te HCM mobile apps to declare their health and destinations prior to going out. Apart from these, businesses have to ensure social distancing, hand sanitizers, and hygiene conditions at the workplace while employees have to wear facemasks, maintain distancing and ensure pandemic prevention measures at all times.

Business Challenges After The Fourth Wave

Vietnam’s fourth wave has been brutal on businesses and residents alike. Not only big businesses but several small and medium-sized businesses and individuals saw lost earnings as residents were required to stay home and only allowed to go out for emergencies.

To continue operating, most factories and manufacturers were required to implement a ‘three-on-site’ policy which means workers eat, sleep and work on-site, or the one route-two destinations policy, where workers are transported from their residence or dormitory by company vehicles to the worksite. Businesses found this process difficult to implement with such short notice as they had to arrange for living arrangements on site. This also added to costs. Besides, even with this policy, many workers became infected, forcing businesses to halt production.

Due to such factory closures, apparel company Everlane said it faced four to eight weeks of delays. Nike cut its forecast citing 10 weeks of lost production in Vietnam. This comes as western markets such as the US and Europe face increased demand for products during the busy holiday period. Contract manufacturers in Vietnam manufactured 51 percent of total Nike brand products in 2020. Further movement restrictions of goods and stringent testing of truck drivers and employees further amplified the situation with goods stuck at ports, factories, and warehouses.

The has further accentuated supply chain issues and potential delays. It may take another five to six months to resume full production. Even Apple has stated that delivery times of its new iPhones are likely due to factory closures in Vietnam.

Vietnam benefitted from the US-China trade war where several businesses relocated or diversified their production to the country. The latest lockdown however, resulted in some businesses diversifying away from Vietnam. Most recently as per Nikkei Asia, Apple put the production of some MacBook and iPad on hold due to supply chain issues. In addition, it has started manufacturing its AirPods 3 in China rather than Vietnam. As per an AmCham survey in August, 20 percent of US businesses moved some production out of Vietnam, while Eurocham stated around 18 percent of its members also moved production. To tide through the crisis, several businesses cut orders due to capacity constraints and backlogs. 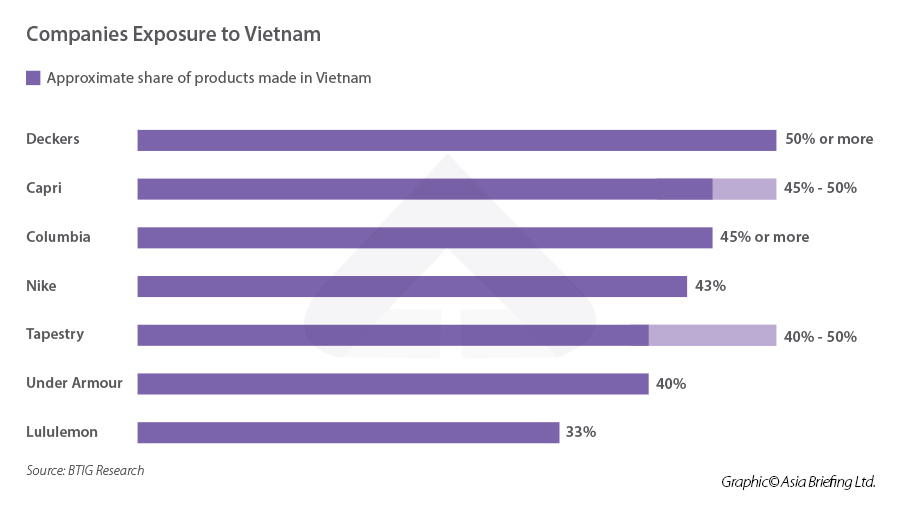 Nevertheless, some suppliers continued to operate with limited capacity such as Eclat Textile, which is a key supplier for Under Armor, Nike, and others. The company said that it expects to increase production to 60 percent from October. Despite these short-term challenges, Vietnam remains attractive for long-term investors, and businesses have expressed optimism about performance in the fourth quarter of the year.

When the lockdowns were lifted, thousands of workers returned to their hometowns for fear of another outbreak and resulting lockdowns. The General Statistics Office (GSO) said that about 1.3 million laborers returned to their hometowns between July and September 15. This also included people who lost jobs and were stuck due to lockdown restrictions. This has posed additional challenges for businesses and factories that want to resume production but are now facing labor shortages. Government authorities also urged employees to stay to help ensure business recovery. Once lockdowns were lifted, some factories reported just 50 percent of staffing as migrant workers returned home.

To help recruit, businesses have started offering incentives such as free COVID-19 tests, hotel accommodation, free meals, and daily stipends to encourage workers to return. Government authorities are also providing transportation from the provinces back to production sites to resume business activity. Some businesses forecast this and began actively recruiting a month before the lockdown ended. They have also given generous benefits to ensure workers remain at their jobs.

Nevertheless, things are looking up.

Government authorities have announced a phased plan to reopen the economy ensuring pandemic prevention in line with health authorities.

Domestic flights are gradually resuming along with interprovincial road and rail travel though passengers have to be fully vaccinated to travel. Several localities have also reopened tourist sites in a bid to attract domestic tourists in the absence of international travelers.

The government has issued a resolution on pandemic control giving guidance on four levels of transmission risk – low, moderate, high, and extremely high. The criteria based in the resolution is expected to be rolled out throughout the country which should make it easier for businesses to resume operations.

Apart from this, the government has introduced several measures to help businesses and individuals recover from COVID-19. These include land rent cuts, deferring tax and land payments, one-time payments for employees, and easing of some restrictions on foreign workers.

Vietnam’s GDP suffered a sharp decline in Q3 of this year by 6.17 percent – the first time its economy had negative growth in a quarter since 2000 due to the extensive lockdowns. In the first nine months of the year, the GDP grew by 1.42 percent. All eyes will be on Q4 and how the economy bounces back with the country reopening.

Nevertheless, Vietnam’s Ministry of Planning and Investment (MPI) has targeted an annual average GDP growth rate of 6.5-7 percent during the 2021-2025 period. It further estimates GDP growth at 3 to 3.5 percent this year compared to 2.91 percent in 2020.

Besides, foreign investors remain bullish on Vietnam’s long-term growth aspects. Most recently Nestle, invested an additional US$130 million to implement projects over the next two years. Sweden’s Tetra Pak has also reiterated it will invest US$5.86 million to expand its existing manufacturing facility in Binh Duong province. Korean LG Display most recently put in an additional US$1.4 billion to expand its factory in northern Hai Phong. In September, Quan Ninh authorities granted an investment registration certificate to Jingko Solar Vietnam – an affiliate of Chinese firm Jing Solar Holding Co.

In addition, while Vietnam suffered setbacks, AmCham has noted that Vietnam’s role in global supply chains is only expected to grow. The business chamber also noted that Vietnam remains an attractive investment destination, including for further relocations out of China. IHS Markit also stated that the pandemic is unlikely to diminish Vietnam’s global role in global value chains that depend on Vietnam as a key manufacturing hub; short-term disruption would force businesses to bear the consequences rather than relocate due to additional costs.

Vietnam’s market fundamentals remain strong and its economy appears resilient to overcome the recent disruption to production due to the pandemic. There are already signs that things are improving. From October until the end of this year, 35 million doses of the COVID-19 vaccine are expected to be distributed throughout the country. While Vietnam had a slow start in vaccinating its population, as per Nikkei’s COVID-19 Recovery Index, Vietnam was among the top 10 percent of countries administering the most vaccine doses daily per capita. Ho Chi Minh City, which remains the currency epicenter, has fully vaccinated 75.9 percent of its residents while Hanoi has vaccinated 52 percent as of October 14. These numbers are positive as this will reduce deaths and severe illness and will be key to keep the economy open.

Given such factors, we’re unlikely to see the government impose a stringent lockdown as they have done in the past. While localized outbreaks and COVID-19 variants are possible in the foreseeable future, the government is likely to take a more nuanced approach and implement small specific lockdowns to ensure business recovery and economic activity. In addition, Vietnam is also developing its own homegrown COVID-19 vaccines, which should be ready for use sometime next year. This would reduce Vietnam’s need to depend on foreign vaccines ensuring enough supply for the local population and also possibly export to other markets.

The government is also developing a roadmap to fully open up to international visitors by June 2022. The plan will be implemented in phases with a pilot program for fully vaccinated international tourists to Phu Quoc island in November 2021. This is expected to be followed by Nha Trang, Ha Long, Hoi An, and Da Lat in December.

While Vietnam is not out of the woods yet, it has enough pull factors to encourage investors to continue their business operations and even move their manufacturing operations to the country. While supply chains will be stretched and businesses will face challenges, these are likely to be short-term. Demand for products remains high, and this will ensure that the production wheels keep churning despite a limited capacity for now.

The Economist notes that COVID-19 affects emerging economies in at least three ways: locking down their populations, damaging export earnings, and deterring foreign capital. Vietnam has already addressed the first one and remains on course to address the rest.