Vietnam’s GDP expanded 5.64 percent in the first half of the year, marking a jump from 1.82 percent in the same period a year ago as per Vietnam’s General Statistics Office (GSO). This increase came despite Vietnam going through the fourth wave of the pandemic affecting industrial parks in the Northern provinces as well as the capital Hanoi and commercial center Ho Chi Minh City. While the Asian Development Bank (ADB) forecasts GDP growth at 6.7 percent, Vietnam’s government expects GDP growth at 6.5 percent for 2021. 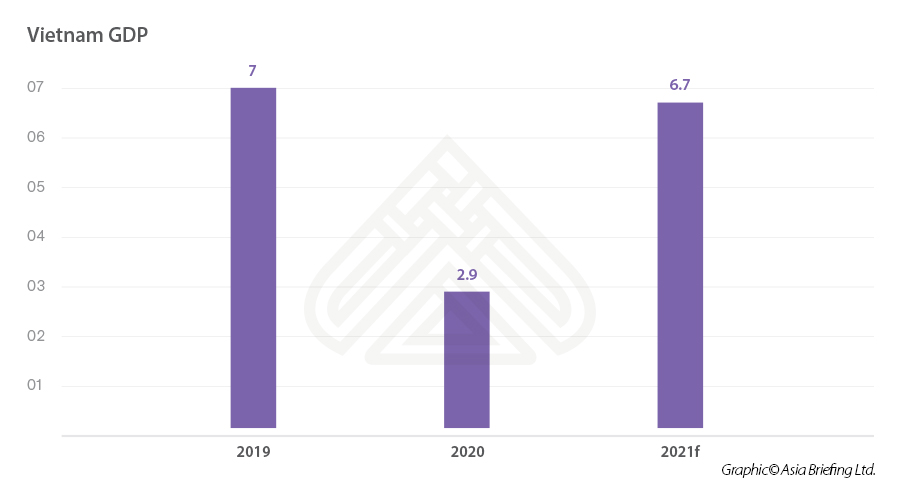 As in previous years, the manufacturing and processing industry has been the driver for this increase with a growth rate of 11.42 percent.

In the first two quarters, agro-forestry-fishery made up 12.15 percent, industry and construction 37.61 percent, and services 41.13 percent of the economic structure.

The latest figures by Vietnam’s Ministry of Planning and Investment (MPI) given an overview of Vietnam’s FDI performance in the first six months of 2021.

Similar to last year, Asian countries represented the lion’s share of FDI into Vietnam. Singapore led the list, accounting for nearly 36.9 percent of total investment capital, a year-on-year increase of 3.6 percent. This was followed by Japan accounting for 16 percent and South Korea, accounting for nearly 13.4 percent, a year-on-year increase of 43.6 percent. China, Hong Kong, Taiwan, and other countries trailed the rest of the list. In terms of FDI projects, South Korea topped the list, followed by Japan, Singapore, Taiwan, and Hong Kong.

Long An province topped the list with total registered investment capital of US$3.57 billion accounting for 23.4 percent of total investment capital. Ho Chi Minh City, now the largest COVID-19 hotspot, came second at US$1.43 billion while Can Tho ranked third. These were followed by Binh Duong, Hai Phong provinces, and the capital Hanoi.

FDI was poured into 18 sectors; as with previous years, manufacturing and processing led with total investment capital of US$6.98 billion and accounting for 45.7 percent of total investment capital. This was followed by electricity production accounting for 35 percent and subsequently real estate, scientific and technological activities, and wholesale and retail trade.

Exports And Imports Buffeted By Strong Growth Despite Shutdowns

Despite the pandemic as well as factory shutdowns, export turnover continued to increase in the first six months reaching US$116 billion up 32 percent compared to the same period last year. In addition, imports recorded US$102.6 billion up 38.7 percent over the same period last year. Exports to the US in the first half of 2021 increased 42.6 percent to US$44.9 billion, contributing to GDP gains. Overall exports expanded 28.4 percent to US$157.63 billion. While smartphones exports were strong, exports of garments, shoes, and other goods to the EU also grew thanks to Vietnam’s free trade agreements including the recently implemented EU-Vietnam free trade agreement (EVFTA).

Despite these numbers, investors continue to face challenges due to the fourth wave, border closures, strict work permit requirements, and quarantine measures as well as factory shutdowns that impact production.

Mergers and acquisitions (M&As) continue to be affected due to travel limitations as investors are unable to travel, hold meetings physically and inspect sites and businesses.

The Vietnamese government has constantly promoted the dual goal policy of containing the pandemic as well as social-economic development by maintaining production where possible. However, this will be a challenge; while cases in the northern provinces of Bac Giang and Bac Ninh are subsiding, economic powerhouse Ho Chi Minh City is still reporting a high number of cases every day with one of the strictest lockdowns since last year.

While the government has now prioritized Ho Chi Minh City residents to get vaccines, just over 3 percent of the country’s population is vaccinated. If vaccine procurement lags this can dent economic growth and prevent the country from a full-scale opening of the economy.

Nevertheless, the State Bank of Vietnam (SBV) stated that it will hold policy rates stable in the second half of the year and pursue flexible monetary and currency policies, as it remains watchful about rising inflation.

Trade, transport, and tourism activities continue to be significantly affected by the pandemic. IHS Markit notes that while Vietnam was able to control the pandemic last year, the latest flare-up makes the country vulnerable to a protracted wave. While GDP grew and exports improved, the fourth wave has led to a decline in manufacturing activity for June. The Purchasing Manufacturers Index (PMI) shows that the index declined to 44.1 in June from 53.1 in May (a score of 50 or more indicates expansion).

Output and new orders both decreased at the sharpest rate since last year. This also affected supply chains which resulted in longer delivery times. The increase in cases also resulted in the closure of production facilities. To maintain production and supply chains, several companies have now asked employees to stay on-site and have made arrangements for testing every few days.

If Vietnam is able to maintain production while battling the pandemic, further growth is expected. Exports from phones and components were up 30.7 percent in the first four months of the year. This kind of growth shows that Vietnam is competing with China in terms of total export value of computer products.

A key uncertainty in the near term is the extent and duration of the current wave of new cases. If the wave escalates further, it poses significant risks to the near-term for domestic demand, with the added risk of disruption to manufacturing output if cases are detected in major manufacturing facilities or logistics supply chains. Further, unless Vietnam can significantly ramp up its vaccination rate in the coming months, it remains vulnerable to new waves.

Despite these risks, over the medium term, a large number of positive growth drivers are creating favorable conditions and will continue to highlight the rapid growth of Vietnam’s economy. This is expected to drive strong growth in Vietnam’s total GDP as well as per capita GDP.

While the government wants to attract hi-tech investment, Vietnam’s role as a low-cost manufacturing hub is expected to continue to grow, helped by the further expansion of existing major industry sectors, such as textiles and electronics.

The government remains keen on helping businesses and those affected by the pandemic. It has delayed taxes and land fee rentals and introduced support policies for employers and employees. The government has announced a vaccine fund to inoculate 70 percent of its population by early 2022. While Vietnam has lagged behind its peers in terms of people vaccinated, inoculations are now rising with vaccine shipments arriving almost every week.

Despite facing many challenges and uncertainties, Vietnam’s performance in the first six months of 2021 demonstrates that the government and economy remain resilient. Although the current crisis is far from over, Vietnam will continue to reap the benefits of its early containment strategy as it continues to lead the way into post-COVID recovery.