US – Vietnam Reach Agreement On Currency, No Tariffs Imposed

The US Department of Treasury in December 2020 labeled Vietnam a currency manipulator, claiming that Vietnam intentionally undervalued its currency in order to gain an export advantage. However, in April this year, after months of investigations into Vietnam’s currency practices, the Treasury Department dropped the designation, despite maintaining that the country still met the manipulator label’s criteria under a 2015 law.

On July 19, 2021, the  State Bank of Vietnam (SBV) reached an agreement with the US regarding Vietnam’s currency practices, in which Vietnam pledged not to deliberately engage in any competitive devaluation of the Vietnamese dong, as well as be more transparent about its monetary policy and exchange rates. The SBV has reiterated that it did not use the exchange rate to create an unfair advantage in international trade, but rather “to promote macroeconomic stability and to control inflation.”

Based on the agreement, the US Trade Representative later issued a formal determination, deciding that it will not take any trade-restrictive measures such as countervailing duties against Vietnam.

The USTR’s announcement last week was warmly received by Vietnam officials. It not only signals positive implications for bilateral trade relations and investment environment between the two countries but also reflects the subsequent international trade policies of the new US government under the Biden administration in the Indo-Pacific region.

Vietnam’s Strengthening Ties With The US

US President Joe Biden’s Interim National Security Strategic Guidance released in March 2021 has named Vietnam, along with the US’s long-standing ally Singapore, as one among its partner nations in its defense plan in the ASEAN region. This was manifested by the official visit of US Defense Secretary Lloyd Austin to Vietnam in July 2021, in addition to Singapore and the Philippines, as the first visit to Southeast Asia by a top member of the Biden administration.

These first diplomatic moves in the Asian region within the first six months after Biden’s inauguration consistently reflect Washington’s foreign policy outlook and commitment towards its presence in the Asia-Pacific region.

According to Vietnam Customs, in the first half of 2021, the US remained Vietnam’s largest export market with a turnover of US$53.6 billion, up 37 percent compared to the same period last year. Major exports to the US included US $7.73 billion in machinery; US $7.61 billion in textile products, accounting for 49.7 percent of the total export value of textiles and garments; and US $5.76 billion in computer and electronic products. 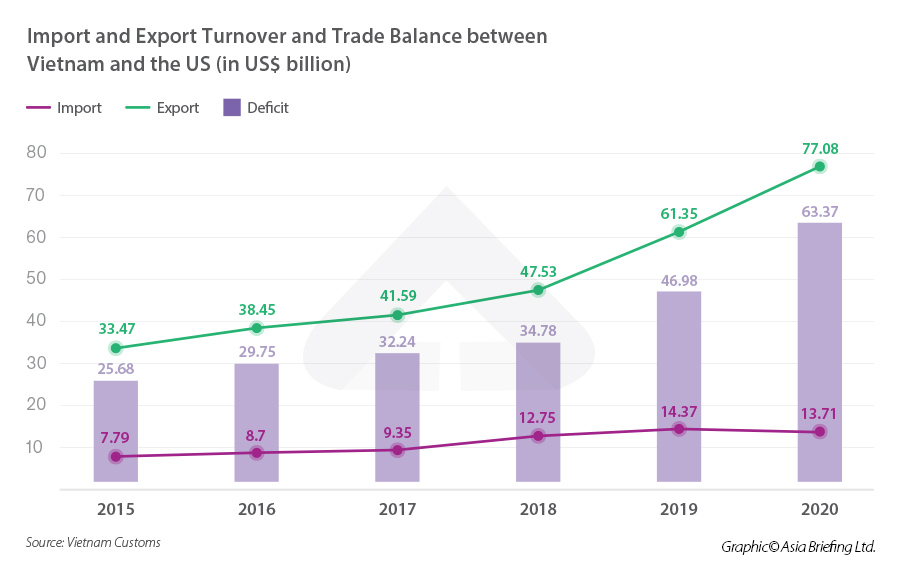 While the Biden administration is pushing forward multilateral trade cooperation in Southeast Asia, it will likely continue President Donald Trump’s confrontational approach towards China to counter the global economic influence of its ‘most serious competitor’.

It’s widely agreed that Vietnam has economically benefitted from the US-China trade war and this is expected to continue to thrive under the current US trade policy. With most of the US’ tariffs on Chinese products remaining in place, foreign investors will be compelled to look for other locations to relocate their manufacturing production – with Vietnam emerging as an ideal China plus one destination in recent years. This manufacturing shift, however, is not only brought about by the trade war but includes factors such as geopolitics, rising labor costs in China as well as the need for diversifying input sources and supply chains amid the pandemic. 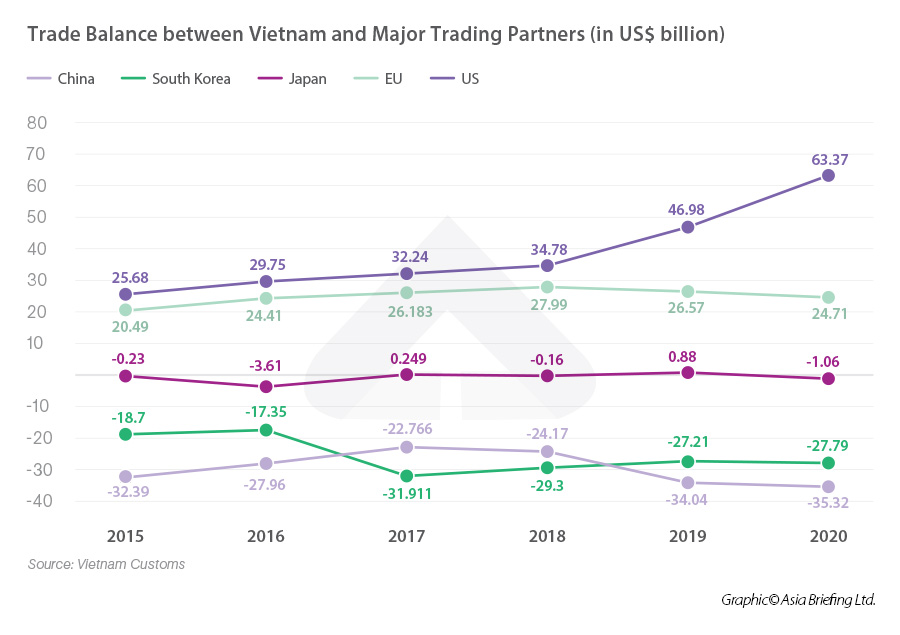 After the allegation of Vietnam’s currency manipulation, 76 US business organizations including the US Chamber of Commerce, the National Retail Federation, and the Internet Association, collectively urged the US Trade Chief to refrain from imposing punitive tariffs due to the detrimental effects of any duties on US manufacturers with operations in Vietnam.

These concerns are due to the fact that global supply chains are becoming more vulnerable due to border restrictions and lockdowns under COVID-19’s impact. Given the disruption to global supply chains and the request by US business organizations such as Amazon and Google, the US government likely factored these issues when deciding not to penalize Vietnam.

In addition, Vietnam’s participation in recent major free trade networks has paved the way for multiple global economic integration opportunities. The ratification of the EU-Vietnam free trade agreement (EVFTA), for instance, will increase the competitiveness of Vietnam’s manufacturing market.

Similarly, Vietnam has also signed the UK-Vietnam FTA (UKVFTA) as the UK transitions out of the EU, and the Regional Comprehensive Economic Partnership promoting trade relations between ASEAN and other major economies including China, Japan, Australia, and New Zealand. The integration of Vietnam with the global economy will open more market opportunities for foreign investors including US businesses looking to manufacturing and sell to other markets.

Despite remaining positive, however, the US is likely to keep a close eye on its trade relationship with Vietnam. The steadily growing demand for Vietnam’s manufacturing and industrial products and the widening trade deficit is likely to weigh on future decisions. Given this continuously widening bilateral trade imbalance, there is a chance that the US may act on this in the long term.

On one hand, USTR while concluding that it would not impose economic sanctions on Vietnam, will on the other hand continue to monitor Vietnam’s implementation of its commitments in relation to currency valuation.

Still, the relationship between Vietnam and the US is not a superficial relationship based upon temporary national interests. It is the result of the efforts for corporation and development over the past decades of both countries. Now that more bilateral trade opportunities are presenting for both countries, the US-Vietnam relation is expected to remain strong.