China’s space program clocked another achievement as it successfully sent its first group of three astronauts to the country’s under-construction space station. China aims to have a fully functioning station by 2022.

On June 17, 2021, China successfully launched the Shenzhou-12 Spacecraft with three astronauts on board, marking another step towards completing the construction of the country’s first planned space station, Tiangong.

The Shenzhou-12 spacecraft was launched on a Long March-2F carrier rocket from the Jiuquan Satellite Launch Center in the Gobi Desert in northwest China’s Gansu Province on Thursday morning.

At 18:48 pm Beijing Time, the three astronauts successfully entered into the Tianhe core module, where they will live for three months. Among other tasks, they will conduct in-orbit testing of the Tianhe module, verify the recycling and life support system, test and train the robotic arm, and manage materials and wastes.

Shenzhou-12’s launch is the third of 11 planned assembly missions for China’s space station construction, which is also the first manned mission out of the four involving astronauts.

From the launch of China’s space program in the mid-1950s to becoming a complete space power with autonomous access to outer space and to deep-space exploration, China has been very persistent in pursuing a “space dream”, as said by Chinese President Xi Jinping in 2013.

In 2019, China became the first country to send an uncrewed rover to the far side of the Moon.

In 2020, China successfully put into orbit its final Beidou satellite in June, sent an unmanned probe to Mars in July, launched an uncrewed mission called Chang’e-5 with the aim of collecting lunar material in November, and successfully landed the Chang’e-5 probe on the moon’s surface in December.

In 2021, China accelerated its Tiangong Space Station program, with the successful launch of the Tianhe core module in April, the Tianzhou-2 cargo craft in May, the Shenzhou-12 manned spaceship in June, and another planned Tianzhou-3 mission in September.

A more detailed timeline of China’s space station construction can be found below. 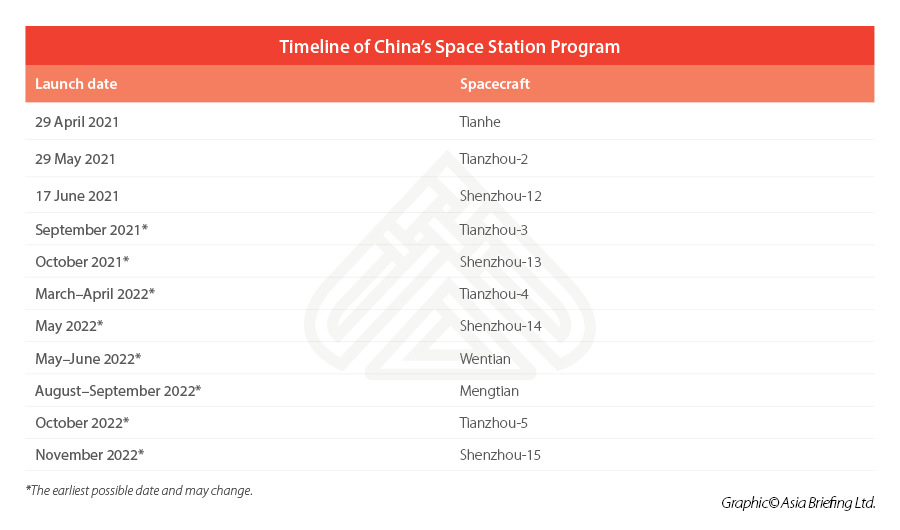 In the long-term, China has set the following goals for its space program:

The two state-owned corporations have decades of experience, secured state funding, thousands of personnel, dozens of labs and subsidiaries, and an established suite of high-tech products and services.

In the years ahead, the Chinese state-owned space titans will continue to lead the country’s space program, while private commercial space companies are likely to serve as “supplements” to China’s broader space activities.

More than half of them were founded since 2014 – a year after Xi Jinping took over as the new leader of China and the government decided to treat civil space development as a key area of innovation. The private space enterprises boast a range of offerings from satellite manufacturing and rocket launch.

FutureAerospace, a state-funded industry think tank, reports that investment in Chinese commercial space firms totaled RMB 3.57 billion (US$550 million) in 2018, and will exceed RMB 30.6 billion (US$4.7 billion) by 2025.

The upsurge is fueled by rising demand for launching satellites. In the next decade, China envisions massive constellations of commercial satellites that can offer services ranging from high-speed internet for aircraft to tracking coal shipments.

A 2019 report by the Institute for Defense Analyses estimates that VC funding for Chinese space companies reached US$516 million in 2018, although the amount was far shy of the US$2.2 billion American companies raised. Unlike American companies, such as SpaceX and Blue Origin, whose billionaire founders are ready to take on large expensive risks, Chinese companies who are late starters have to consider whether they can be supported by deep-pocked and risk-prone investors.

Some private companies like LandSpace and MinoSpace have managed to accrue foreign investment, which could make it easier for them to compete on a global scale, in terms of taking on overseas clients, launching from other countries, and attracting international talents.

However, to maintain investor confidence will not be easy. At present, none of the new commercial space companies are profitable. These companies’ launch success rates have been erratic. And they have shown no sign of explosive innovation – the current offerings consist almost solely for small, solid-fuel, single-use rockets.

Thus, China’s private commercial space sector is not yet positioned to upend the state-dominated or global space ecosystems any time soon, though eventually new entrants may carve out niche areas for themselves in the domestic market.