Xinjiang Uygur Autonomous Region (“Xinjiang” for short) is the largest province-level administrative region in northwest China, covering an area of one-sixth of the country’s land. It is also the Chinese province with the longest land border of more than 5,600 kilometers – a quarter of the country’s entire land border.

Until the end of 2019, Xinjiang had attracted more than 1.8 million market entities, including 359,000 enterprises. Foreign and domestic business giants, including German chemical giant BASF and China’s real estate conglomerates Wanda Group, have invested in the region. 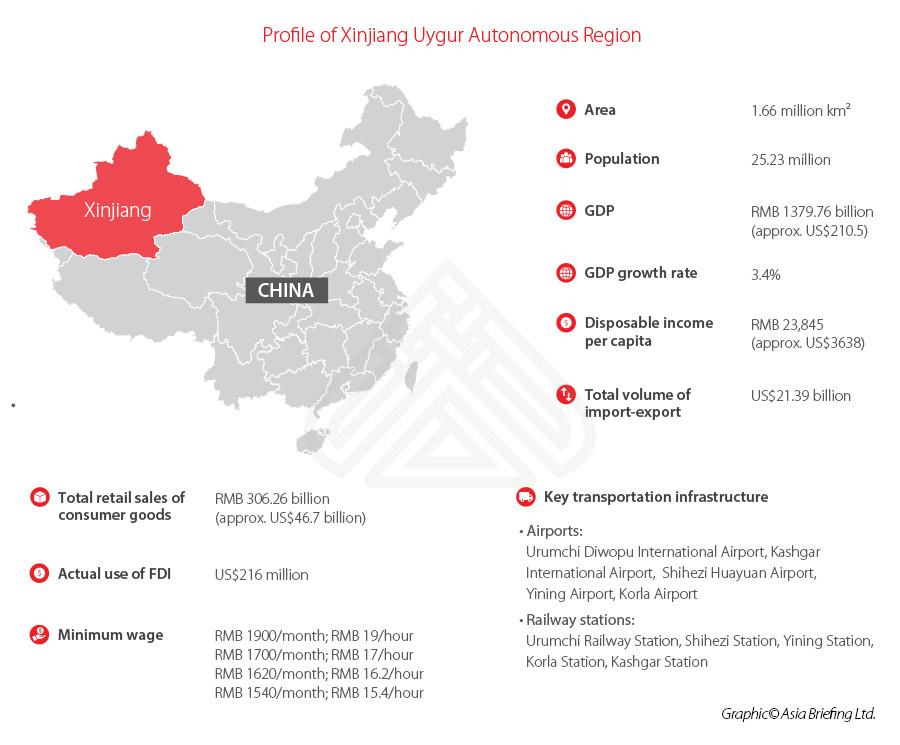 The region is China’s largest growing base of cotton. In 2020, the total cotton output in Xinjiang reached more than five million tons, accounting for 87.3 percent of that in the entire China. With a large pastureland, Xinjiang is also one of China’s major sheep farming areas and fine-wool production base.

Xinjiang’s location may be relatively remote, but the region is rich in resources, has the largest reserves of oil, natural gas, and coal in China, which account for 30 percent, 34 percent, and 40 percent of the country’s total, respectively. For this reason, energy and related industries like petroleum extraction and petrification are pillar industries in Xinjiang.

Xinjiang also has more than 130 types of mineral resources. The region’s reserves of beryllium and mica are the highest in China. Metallurgy processing is one of the most important industries of Xinjiang.

As a major agricultural base, Xinjiang’s primary industry still accounted for 14 percent of its GDP in 2020. Xinjiang’s sugar beet and fruits are famous among local consumers and for exports, particularly, Yili apple, Korla pear, seedless white grape, and Hami melon. 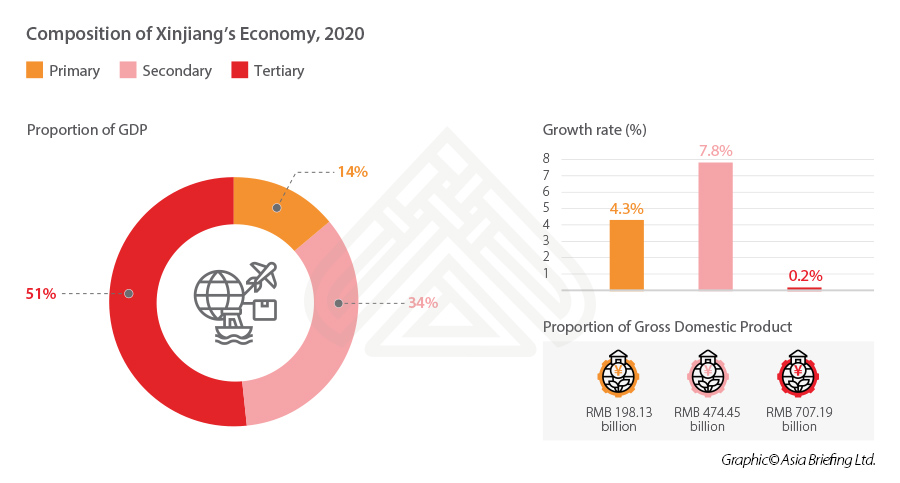 The renewable energy industry is also showing promising growth in Xinjiang. In 2020, hydropower, wind power, solar power, and other renewable energy accounted for 19.8 percent of total energy production, up from the nine percent in 2017. 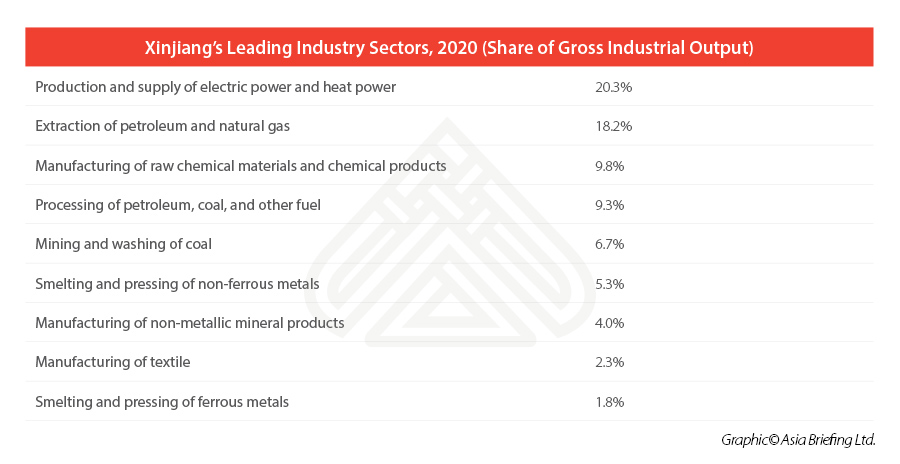 In 2020, despite the COVID-19 pandemic, Xinjiang’s imports and exports of goods totaled US$21.387 billion, with exports amounting to US$15.836 billion and imports amounting to US$5.551. The surplus in imports and exports of goods (exports minus imports) was US$10.285 billion, which is smaller than that of the previous year but is still within the reasonable range. 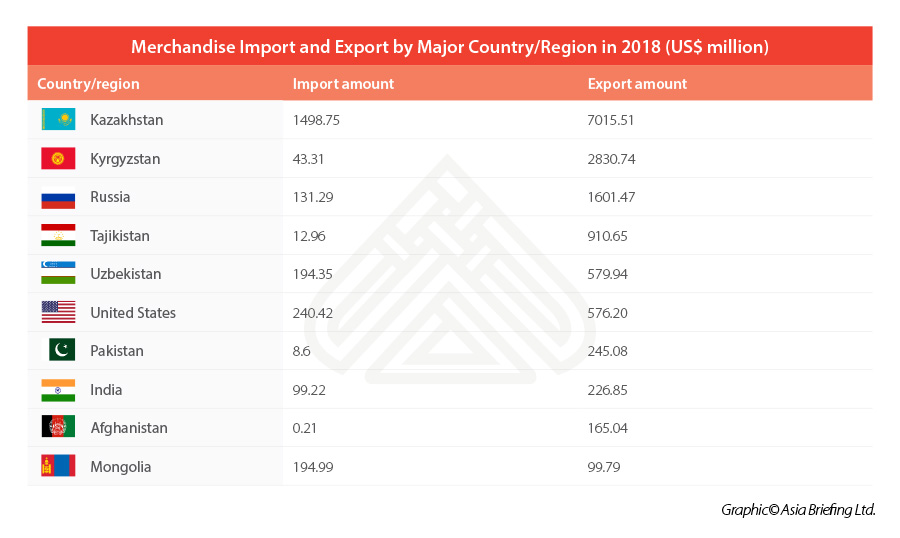 Border trade reached US$12 billion in 2018, accounting for 60.1 percent of the region’s total trade.

Xinjiang has become one of the hubs of trade in goods between European and Central Asian countries and China through the China‑Europe China Railway Express (CR Express) cargo trains. As the Freight Train Logistics Center in Urumqi was completed in May 2016, goods from different parts of China can gather at Urumqi and leave China by train through Korgas Port or Alashankou Port. As of May 2020, the CR express cargo trains departing from Urumqi run on 21 lines, covering 23 Asian and European countries and regions.

As to foreign direct investment (FDI), in line with China’s national reform and opening up, Xinjiang has always been endeavoring to attract foreign investment by utilizing its resource and geographic advantages and supportive policies.

By 2018, the number of foreign invested enterprises (FIE) into Xinjiang reached 796, with the yearly actual utilized FDI amount at around US$200 million to US$250 million. The source of FDI has been diversifying and the number of countries or regions that invest in Xinjiang has grown to 54, covering all three industries and spreading in 14 of Xinjiang’s prefectures and autonomous prefectures.

Among all the FDI sources, Hong Kong has always been Xinjiang’s major investor, accounting for around 40 percent of Xinjiang’s total foreign investment as per actual utilized FDI amount. By the end of 2018, in total, 266 Hong Kong invested enterprises operated in Xinjiang. In 2018 alone, Hong Kong signed 85 investment contracts with Xinjiang, with contractual investment amount reaching US$1112.98 million. The actual utilized FDI amount was recorded at US$91.16 in 2018.

Foreign investments into Xinjiang are spread across different sectors; the top five industries that attract the most foreign investment are manufacturing, mining, leasing and business service, software and information technology, and finance. Besides, the agricultural industry and the retail and wholesale industry also perform well in attracting foreign investment. 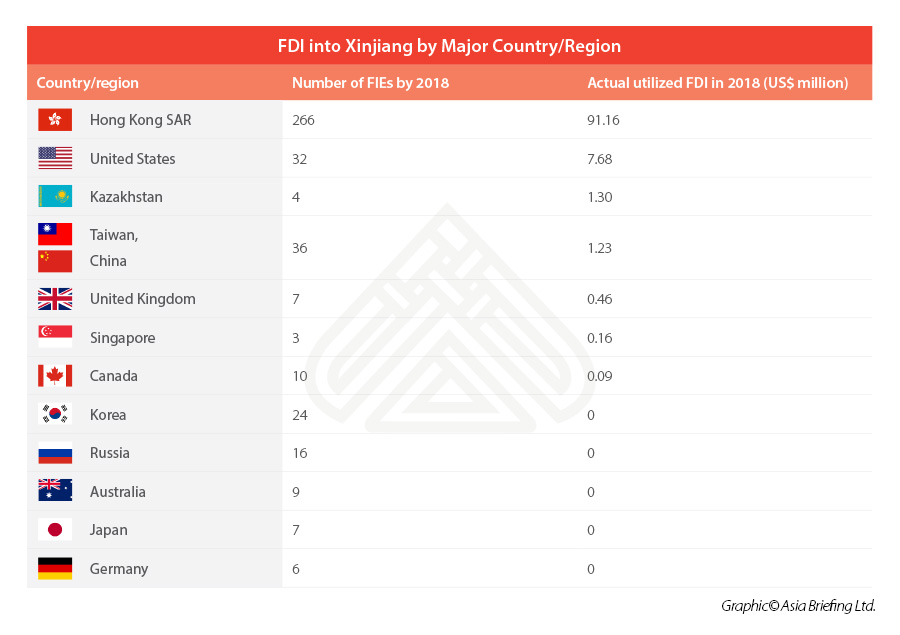 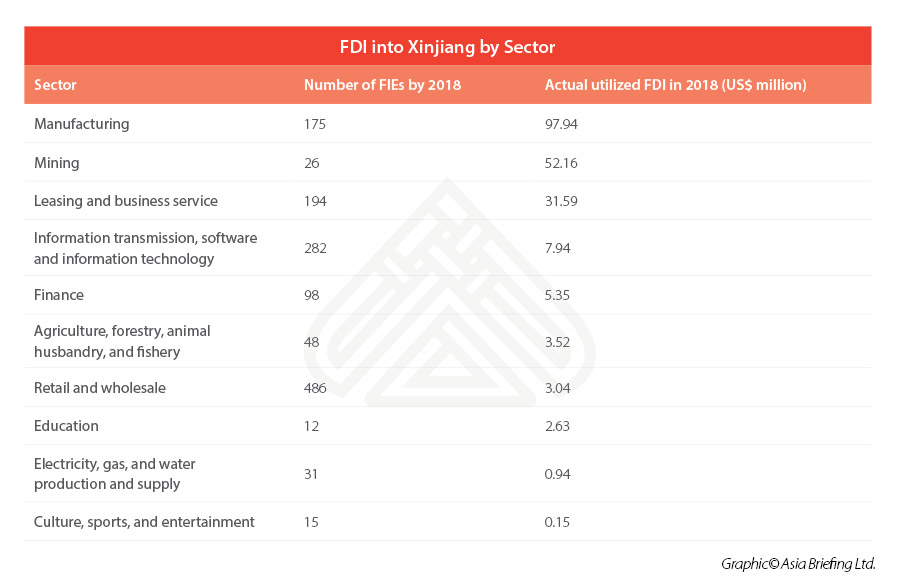 To lure foreign capital into China’s western regions, including Xinjiang, the country released the Catalogue of Industries Encouraged for Foreign Investment in the Central and Western Region of China. Favorable treatment is in place for foreign-invested enterprises (FIEs) engaged in doing business in the industries encouraged by Xinjiang, including:

Foreign invested projects in the listed encouraged industries, whose actual investment amount is more than US$5 million, can enjoy the fiscal subsidy of no more than 10 percent of the value-added tax (VAT) paid by the enterprises within five years from the date of production and operation.

From January 1, 2010 to December 31, 2020, newly settled enterprises in Xinjiang’s poverty-stricken areas, which fall under the scope of the List of Corporate Income Tax Preferential Incentives for Key Industries Encouraged for Development in Xinjiang Poverty-stricken Areas, are allowed to be exempt from CIT for the first year and second year and be entitled to 50 percent deduction of CIT from the third to the fifth year – with effect from the first tax year in which it derives the first item of income from manufacturing and business activities.

Although the latter two preferential policies expired last year, businesses should pay attention to whether there will be any extension.

Where To Invest In Xinjiang 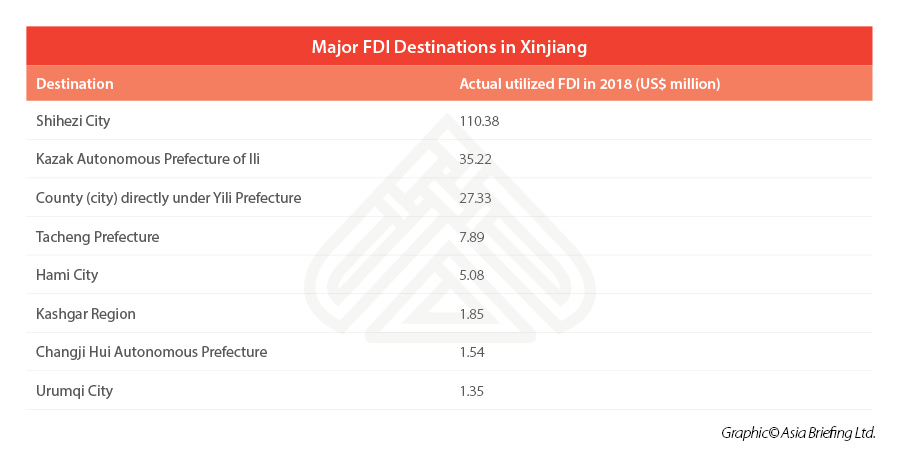 Located on the eastern frontier of Central Asia, Urumqi is the capital of China’s Xinjiang Uyghur Autonomous Region. Urumqi, which means “beautiful pasture” in Mongolian, is also the most remote city from any sea in the world. Despite this fact, the city thrived as a trading hub along the Silk Road during the Tang and Ming dynasties. Today, with its large coal reserves, strong transportation networks, and a burgeoning consumer class, the city has grown to become the center of industry, retail, and commerce in Western China, as well as the regional trade hub for Central Asia.

A priority target of Beijing’s “Go West” policy, Urumqi has benefited from three development zones that have helped shape its competitive edge in industry and trade:

Urumqi ETDZ was established on the approval of the State Council in August 1994. It is the first state-level economic and technological development zone in Xinjiang. In January 2011, it merged with Toutunhe District, a municipality under the jurisdiction of Urumqi, and thus has become a multi-functional economic zone integrating state-level development zone, administrative region, international land port area, comprehensive bonded area, as well as functional parks with different characteristics. It plays an important role in developing the core area of the Silk Road Economic Belt. Urumqi ETDZ enjoys a prime location located within 10 kilometers of Urumqi’s downtown area, railway station, highways, and airport. In 2003, the zone’s activities increased with the addition of an export processing zone. Major industries are machinery, power transmission equipment, new energy, biopharmaceuticals, food and beverages, chemicals, and plastics.

Urumqi HIDZ was established in 1992. In 2011, the zone was merged with Xinshi District for a combined land area of 263 kilometers. Major industries include information technology, biopharmaceuticals, new materials, new energy, petrochemicals, unique resources processing, and machinery.

Ganquanbao ETDZ was established in 2007. It is located in the north of Urumqi, 55 kilometers away from the city center. Ganquanbao ETDZ has been promoted to the national level economic and development zone and it solves the lack of construction and development space issue in Urumqi. It is forming a new industrial cluster with coal electricity, coal chemical industry, petroleum and petrochemical industry, and new energy being focused.

Shihezi is a sub-prefecture-level city in Northern Xinjiang, 150 kilometers always from Urumqi. While much of Xinjiang’s trade revolves around crops, such as tomatoes, melons, fruits, and nuts, Shihezi is different. Shihezi is one of the primary producing areas of Xinjiang cotton, and is a textile hub of China.

The Shihezi Economic and Technological Development Zone was established in 1992 and was promoted to national level economic zone in 2000. It is the only state-level economic and technological zone in the western areas of China to have been established other than in one of the regional or provincial capital cities. It serves as Shihezi’s gateway to the outside world. Shihezi has benefited from increased investment as one of the main avenues for trade between and among China, Russia, and the countries of Central Asia. Major industries include textile, food processing, modern agricultural equipment, and chemical industry.

Ili Kazakh Autonomous Prefecture (also as Yili) is an autonomous prefecture for Kazakh people in Northern Xinjiang, China, one of five autonomous prefectures in Xinjiang. It is bordered by Mongolia, Russian, and Kazakhstan. Including Khorgas, Bakhty, and Jeminay, there are nine ports of entry at the national level. With the unique location advantage, Ili has been an important commercial hub and international channel of opening up to the west.

This is the major economic zone of Ili. It was approved and established in 2013 on the basis of the previous Yining Border Economic Cooperation Zone. Major industries include biotechnology, information technology, deep processing of agricultural products, new building materials, coal, electricity, coal chemical industry, machinery and equipment manufacturing, textile and garment processing, and modern service industry. The zone provides benefits in tax incentives and greater financial freedoms for businesses investing in the area, with the main focus being on trade with Kazakhstan and the rest of Central Asia. By far, 1,136 enterprises have been registered in the zone, 31 of which have an annual revenue over RMB 100 million (US$15.25 million).

Kashgar is close to borders with Pakistan, Kyrgyzstan, Afghanistan, Uzbekistan, and Tajikistan and already hosts Central Asia’s largest market. The city effectively links China and Central Asia and is to be developed into a major trading and logistical bridge. In 2010, Kashgar was approved to become a special economic zone, enjoying special policies on industry, taxation, finance, land, and foreign trade. It was designed as a westward export processing base and commodity transfer center in Xinjiang. It is also expected to serve as the “New Eurasian Land Bridge” to expand the international market in central and south Asian countries.

China’s ‘Go West’ strategy, which aims to narrow the economic gap between the less developed west and affluent east coast, as discussed in the previous sections, has entered its third decade.

With the launch of the Belt and Road Initiative (BRI), Beijing hopes to fit China’s western regions, including Xinjiang, into its ambitious BRI blueprint. Xinjiang needs to enhance its position as a traffic hub for China to connect BRI countries in the west.