China’s pet industry is booming. Long gone are the days when animals mainly served a practical function; today, they have become an integral part of the family – especially for younger people who are increasingly shunning traditional family structures. As demographic and cultural trends continue to shift, China’s pet market shows huge potential for growth, offering a treasure trove of opportunities for investors. In this article, we look at the latest trends and opportunities for investors in the China pet market, from the production of pet food to pet tech and accessories to veterinary services and more.


On June 10, the hashtag #China’s single households surpass 125 million# began trending on the microblogging website Weibo after the finance channel of China Central Television (CCTV) posted a video about how younger single men and women are driving a boom in pet keeping.

Younger generations are increasingly choosing not to marry and have children – a phenomenon reflected in the plummeting birth rate seen over the last few years – and many are therefore turning to man’s furry friends for emotional fulfillment. Rising incomes and improving living standards, occurring in tandem with increased urbanization, means people have more disposable income to spend on their pets – whether that is on food, healthcare, toys, or experiences – providing a huge opportunity for companies operating in these spaces.

With new pet owners who are young, well-educated, and wealthier, the pet industry is set to see explosive growth over the next decade. In this article, we discuss the growth of China’s pet industry and new trends and opportunities for foreign investors.

China’s pet industry has grown rapidly over the last two decades. Although the industry first began to emerge in the 1990s with the entrance of multinational pet brands, such as Mars Inc. and Nestle Purina Pet Food, as well as the launch of the first China International Pet Show in 1997, the trend of pet-keeping first began to take off in earnest in the 2000s. Cultural attitudes toward keeping animals as pets began to shift along with increasingly relaxed views on marriage and children, at least among the younger generations. The first domestic pet brands and animal hospitals began to develop during this period, with a focus on cats and dogs in particular.

The number of pets began to grow more significantly from 2010 onward, as millennials entered the workplace and increasingly formed so-called “dual income, no kids” (DINK) families, along with increased urbanization. Interest in more niche and exotic animals, such as reptiles, rodents, and aquatic animals, rose, and as China’s domestic e-commerce industry flourished, pet retail also began to move online, with platform companies, such as JD.com and Alibaba’s Taobao, offering pet products.

The COVID-19 pandemic has sped up many of the existing trends seen in the pet industry and is likely a factor for the explosive growth in pets over the last few years. As people spend more time at home and white-collar offices adopt hybrid or remote work models, more people have the capacity to care for a pet. The pandemic also accelerated the shift to online purchases of pet products, likely to the detriment of brick-and-mortar pet stores. 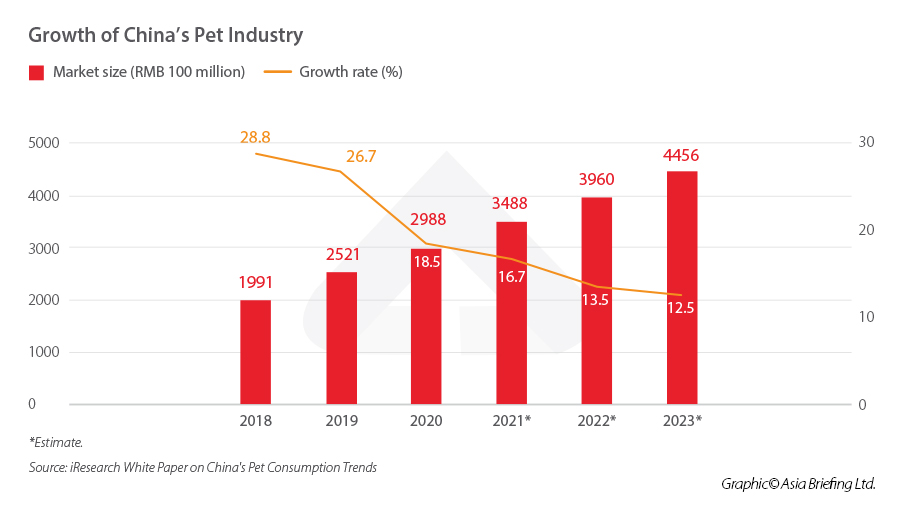 The number of cats kept as pets overtook dogs for the first time in 2021. There was a total of 58 million cats and 54 million dogs in China at year-end, according to market research firm Intelligence Research Group. The popularity of cats is also growing faster than that of dogs, growing 19.4% year-on-year in 2021, compared to just 4% growth in the number of dogs. 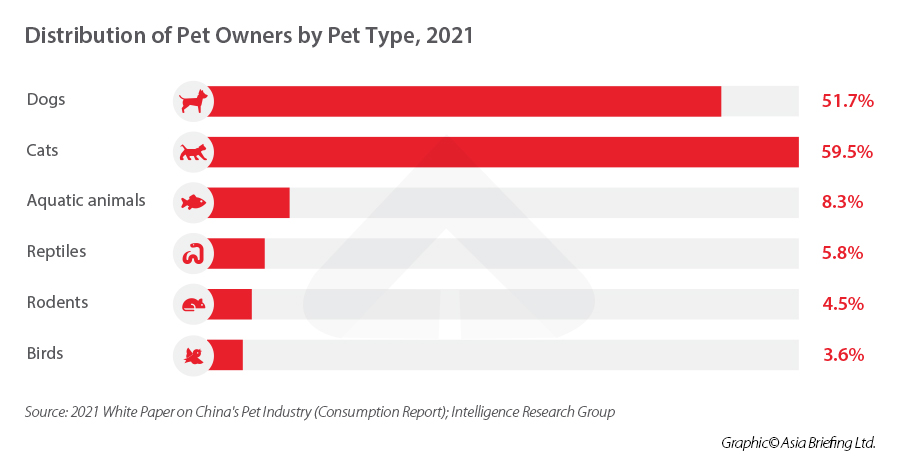 Despite there being fewer overall dogs than cats, dog owners tended to spend more on their pets compared to cat owners. Data from the 2021 White Paper on China’s Pet Industry (Consumption Report) (“consumption white paper”) produced by the pet big data platform Pethadoop under the guidance of the pet industry branch of the China Animal Husbandry Association (not to be confused with the iResearch white paper) shows that the annual average spend per dog was RMB 2,634 (US$390.62), compared to RMB 1,826 (US$270.79) for cats.

As is the case with many other retail and service sectors, the COVID-19 pandemic spurred a shift to more online consumption of pet products and services. According to the consumption white paper, pet owners reported online platforms as their primary place to buy food products, with 74.5% buying pet food online, 73.1% buying snacks online, 64.2% buying nutritional products online, and 80.4% buying other pet supplies online.

Pet products were reportedly one of the product categories that saw considerable growth in consumption during the otherwise underwhelming 618 shopping festival on June 18, 2022, with transaction volume on Jingdong Pets – the dedicated pet platform of e-commerce company JD.com – exceeding the total transaction volume in 2021 in the first four hours of the festival.

However, offline shopping still remained relatively high in 2021 and has shown of recovering significantly. As China achieved a great level of success in containing the spread of COVID-19 in the latter half of 2020 and most of 2021, offline shopping recovered significantly. For pet nutritional products, 47.9% of pet owners said they purchased them from animal hospitals and 32% purchased them from pet stores.

In addition, the relaxing of COVID-19 restrictions in 2021 also gave way to the recovery of offline pet services, most commonly pet grooming, fostering, training, and pet recreational parks. Pet training saw a 116.7% year-on-year increase in 2021, while pet grooming grew by 31.7%.

In addition, the purchase of the animals themselves is still predominantly done offline, although online pet transactions are also increasing. According to the iResearch white paper, the majority of people acquired a cat or a dog either from an offline store or from a friend, family member, or acquaintance. Only 19% acquired a cat online and 13% acquired a dog online in 2020, despite the impact of the pandemic on offline consumption.

Moreover, the length of time that a person has been a pet owner is relatively short. 52% of pet owners in 2021 had kept a pet for less than three years, and 19% had kept one for less than one year. In addition, the average number of pets per person in China remained mostly unchanged from 2020, despite the overall increase in the number of pets. Both of these statistics indicate that the growth in the market is driven in large part by new pet owners, rather than existing owners acquiring more pets, which combined with the fact that pet owners skew young suggests huge potential for market growth among younger generations.

Veterinary hospitals are becoming increasingly diversified in their offerings, with many also providing retail products and services, such as grooming and pet sitting.

More and more consumers are also choosing veterinary hospitals for non-medical services, mostly grooming and pet sitting. 30.7% of pet owners choose hospitals for grooming – a three-fold increase from 2020 – and 17.7% chose them for pet sitting.

There are several sectors of the pet industry open to foreign investment, and many foreign-invested companies and multinationals have already entered the space. Sectors related to the pet industry included the Catalogue of Encouraged Industries for Foreign Investment (both the 2020 version and the 2022 draft version) include:

Below we discuss some of the market segments in the pet industry that present opportunities for investment.

Pet tech and electronics are becoming increasingly popular in China, as the tech-savvy millennials and Gen Zers combine their passion for pets and gadgets. Products such as automatic food and water dispensers, electronic collars, and home camera setups that let owners check in on and even communicate with their pets when they are out of the house are becoming the norm for pet owners. Many of these products also have “smart” features, enabling them to be connected to the internet and controlled and monitored via a user’s mobile phone.

Many companies in this sector are small start-ups with funding from venture capitalists and other institutional investors. The pet tech start-up Tortoise & Panda, for instance, has received seed investment from Hillhouse Capital and Daocin Capital. Some larger tech companies have also produced product offerings in this space, such as the electronics giants Xiaomi and Midea, although their scope of products remains limited to a few items. Other companies in this field include Petkit and iKuddle.

The single largest sector in the pet industry is pet food, which accounted for 51. 5% of the industry in 2021, according to the consumption white paper. However, the proportion of the pet food sector is shrinking, falling 10 percentage points from 2019, when the sector held a 61.4% market share. Meanwhile, the veterinary services sector increased by 10 percentage points since 2019, up to 29.2% from 19%.

In 2021, China’s pet food production reached 1.13 million tons, a year-on-year increase of 17.3%. The largest pet food producing regions in China were the northern provinces of Hebei and Shandong, which reached a production output of 429,847 tons and 268,064 tons, respectively, according to data from the China Feed Industry Association.

Many of these multinationals entered the market at a relatively early stage and therefore already enjoy strong brand recognition by Chinese consumers.

Domestic brands are catching up with multinationals. One of the largest domestic pet food companies is Yantai China Pet Foods Group, which owns several subsidiaries, including Wanpy, Dr Hao, and King Kitty.

In 2020, the scale of China’s pet product industry reached RMB 36.9 billion (US$5.5 billion), according to an industry report from Chinese capital market company Industrial Securities. This is a year-on-year growth rate of 14.13%. The largest market segments were hygienic pet products and daily necessities, which accounted for approximately 77% of the market combined.

This was followed by accessories and travel products (such as crates and carrier bags), which accounted for 16.91%, and pet toys, accounting for 6.11%.

The report also noted that the pet product market in China is highly fragmented, with market players mostly composed of three types of companies:

Veterinary services are the second largest market segment after pet food. The sector has reached a penetration rate of 75.8%, according to the consumption white paper, making it the fourth highest segment by penetration rate. In addition, less than 50% of cats and dogs were inoculated in 2021, despite being required to receive inoculation at least once a year. This suggests that the veterinary market has significant space to grow as demand and awareness increase.

The number of pet hospitals has also grown significantly over the past few years. China’s leading pet hospital company, Ruipeng Pet Hospital, now has over 800 locations across the country.

The pet medicine industry also has significant room for growth, with domestic companies’ capabilities still falling somewhat behind that of other developed countries. Several foreign players have entered the Chinese pet medicine market, including Boehringer Ingelheim and Merck Animal Health. One of the largest pet medicine companies in the world, Zoetis, recently began work on a new manufacturing facility in Suzhou.

The pet medicine industry is a relatively challenging and expensive one to operate in, and is therefore dominated by large pharmaceutical companies. One of the main challenges of operating in China for foreign companies is the requirement for medicines to undergo additional rounds of testing and certification in China before they can go on sale, a procedure that can take up to three years on top of the many years of R&D.

By looking at current socio-economic and demographic trends, we can be very confident in the prediction that China’s pet industry will continue to grow in the coming years and decades.

Although the total number of pets in China is large, the penetration rate of pets is still lower than in many other developed countries – just 20% to Japan’s 38% and the US’s 70%. As unmarried millennials progress into middle age and Gen Zers enter the workforce, the core existing and potential consumer base of the pet industry will become wealthier and more willing to spend on their pets, especially in the absence of children.