In this article, we outline the rates and calculation methods for both income sources, and summarize common tax deductions and inclusions in income for foreign nationals working in India.

Who Is A Foreign National In India?

Any individual who is not a citizen of India is considered a foreign national.

However, whether a foreign national is liable to pay Indian income tax is dependent on the individual’s physical presence in India during a financial year which runs from April 1 to March 31, regardless of their citizenship or the purpose of the stay.

Section 6 of the Income Tax Act, 1961 defines the principles governing an individual’s residential status in India.

Total income tax is calculated in accordance with the tax rates and rules that stand on the first day of April of the assessment year.

Employment income includes all amounts, either in cash or in kind, that arise from an individual’s employment. Wages, pensions, bonuses, commissions, perquisites in lieu of salary, reimbursement for personal expenses, securities or sweat equity shares, contributions to superannuation funds, etc. are all included in employment income.

Taxation Under The Old Tax Regime

Perquisites exempt from tax are provision of medical facilities and provision of mobile phones used by the employee for business purposes.

An allowance is defined as a fixed quantity of money given regularly in addition to salary for employees to meet specific requirements. Allowances increase taxable income. Examples of common allowances for expatriates include:

Many allowances have a small exemption amount. For example, the children’s education allowance has an exemption for up to INR 100 (US$1.34) per month for up to two children.

Other allowances are fully exempt as long as actual expenses are incurred by the employee. For example, reimbursement of expenses actually incurred in the performance of an individual’s employment is exempt.

Many other exemptions exist for allowances, and taxpayers should consult with a chartered accountant in order to take full advantage of such exemptions.

A deduction from income is available up to INR 150,000 (US$2,015) for investments in life insurance, contributions to social security funds, and tuition and fees for the purpose of full-time education at a university, college, or other educational institution. 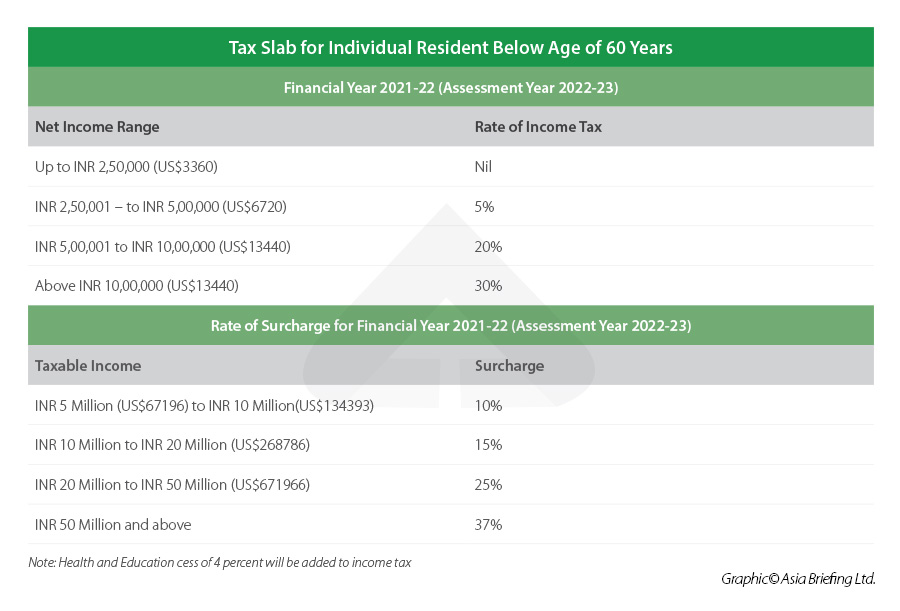 The Finance Act, 2020 has introduced a new optional tax regime under section 115BAC, with effect from financial year 2020-21. The new regime gives an option to individuals to pay income tax at a lower rate. However, this regime does not allow individuals to claim exemptions and deductions in 70 categories, including leave travel allowance, house rent allowance, special allowances etc.

This regime is optional and salaried individuals can choose to be taxed under the new regime either at the beginning of the financial year or during the time of filing their income tax return. The individual will always have the option of switching back to the old regime every year.

There are special tax rates for expatriates on income arising from non-employment sources that includes long and short-term capital gains earned on the disposal of capital assets situated in India, interests earned, and royalties payable by an Indian concern.

It should be noted that investments in shares by non-resident foreign nationals are governed by the Indian foreign direct investment policy.

There is also a health and education cess assessed at 4 percent of the income tax, and applicable surcharges will be levied if the annual income exceeds INR 5 million (US$67,196).

Most expatriates worry about “double taxation” – paying taxes to two different countries on the same income. A foreign taxpayer working in India may be able to reduce taxable income in their country of primary residence (and double taxation) under a double taxation avoidance agreement.

Opportunities for tax planning exist in how employers structure wages, perquisites, and allowances. In general, it is tax favorable to have expenses reimbursed rather than given as perquisites or included in wages. However, every situation is different, and foreign nationals should consult a chartered accountant to determine the best structuring of wages and benefits for their situation.