Foshan is a prefecture-level city in the southern province of Guangdong and the third largest city in the Pearl River Delta Economic Zone (PRD). Located only 25 km away from the megacity of Guangzhou to its northeast, Foshan has long been a magnet for foreign investors seeking to tap into the region’s thriving economy.

Traditionally a powerhouse for manufacturing electronic goods, the city’s economy has become increasingly diverse thanks to a drive to expand the service sector and a pivot to high-tech industries and smart manufacturing.

Today, the city and its expansive development zones are riding the wave of intelligent transformation, offering exciting new prospects for innovation and investment in some of the most coveted industries of the digital era. 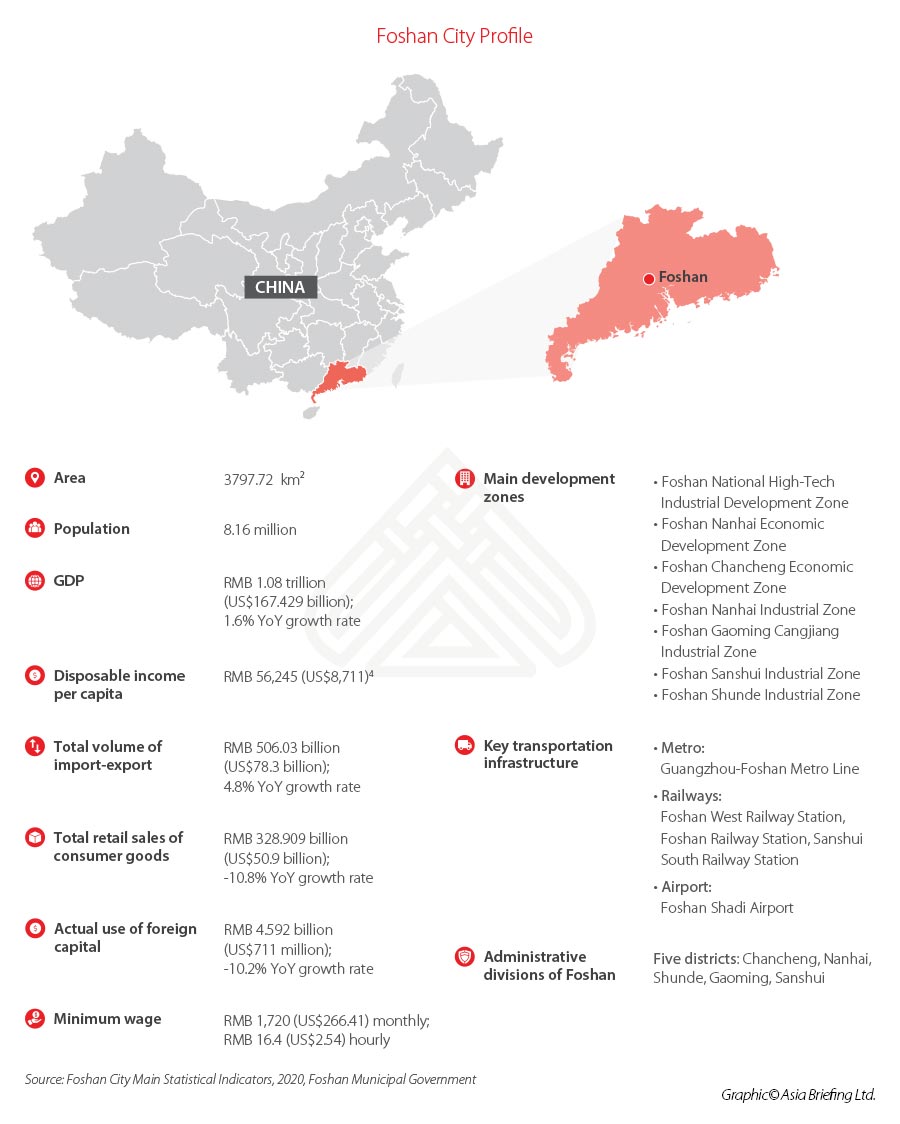 The total volume of import-exports saw a higher rate of growth, reaching RMB 506 billion (US$78.3 billion) at a year-on-year growth rate of 4.8 percent, 5.7 percentage points higher than the province’s growth rate and the highest among the nine PRD cities.

Foshan is striving for an overhaul of the city’s manufacturing industry, but this is by no means a new goal. Since at least 2010, the Foshan government has stressed the importance of upgrading and transforming its traditional industries.

The ‘Made in China 2025’ program launched by the central government in 2015 served to accelerate this transformation, aiming to increase added value from advanced manufacturing and high-tech products and grow the service sector.

Socioeconomic factors may also serve to spur growth in the digitization of industries. With a rapidly shrinking workforce and a younger generation more inclined toward white collar jobs, manufacturing positions are becoming harder to fill, heightening the need for automation.

The city is therefore going full steam ahead with the digitalization and automation of manufacturing, promoting the application of robots, expanding 5G coverage, and pushing for adoption of artificial intelligence and cloud computing to create a new generation of smart factories.

To drive this transformation, a 2020 government implementation plan aims to promote the digital economy in part by accelerating the development of supporting industries, such as integrated circuits, 5G, software and information technology services, and big data. It also aims to bolster manufacturing of electronic components and modules, ultra-high-definition displays, intelligent equipment and robots, and automotive electronics, while fostering emerging technologies, such as artificial intelligence, virtual reality, and network security.

Companies active in this space include:

Another industrial beneficiary of this modernization drive is the automotive industry. A mainstay of the local economy, much of the auto manufacturing is concentrated in Nanhai District where leading companies Honda, Toyota, and FAW-Volkswagen have factories.

Foshan has also become a hub for the development of new energy vehicles (NEVs). China’s central government has set ambitious goals for, both, the NEV’s market growth and technological advancement, aiming for 20 percent of all new car sales to be NEVs and for significant reductions in the average power consumption of pure electric vehicles by 2025, further bolstering the development of the industry.

A rapidly growing segment in the NEV industry is the hydrogen fuel cell industry. The so-called ‘Hydrogen Valley’ near Xianhu Lake in Nanhai District has cultivated one of the most complete hydrogen energy industry chains in China. It has attracted more than 50 hydrogen energy projects with a total investment of RMB 250 billion (USD 38.7 billion), 30 hydrogen energy companies, and 15 hydrogen refueling stations as of 2020.

The shift to smart manufacturing is happening in tandem with the growth of the services sector, accomplished in part by integrating secondary and tertiary industries in the form of producer services that complement the manufacturing industry. Artificial intelligence, big data, blockchain, 5G, e-commerce, logistics, and professional services are among areas highlighted for further development.

A relatively mature segment of this tertiary industry is financial services, established mainly in the Guangdong Financial High-Tech Zone in Nanhai District. Hailed as the only back-office service base in Guangdong Province, this zone has attracted 864 projects and employed over 60,000 white collar workers as of mid-2020. Till this period, total investment had reached RMB 123.9 billion (US$19.1 billion), up from RMB 51.8 billion (US$8.2 billion) in 2015.

HSBC, AIA, KPMG, and many other companies covering high-end services, such as banking, insurance, securities, service outsourcing, private equity, venture capital, and financial leasing, have a presence in the zone.

The government is seeking to further develop the zone into a key channel for attracting investment and talent and assisting with the upgrade of the PRD’s manufacturing industry. To this end, the government has proposed five key measures, which include increasing policy support, improving the quality of investment projects, and improving service management.

In a 2020 announcement, the Foshan municipal government outlined several revised measures and policies for opening up further to the outside world and improving the use of foreign capital, building upon the “10 policies for foreign investment” stipulated by the Guangdong provincial government.

The measures seek to improve mechanisms for foreign investment by providing increased land use priorities, support for talent and financing, investment, trade, and tax facilitation, and improved IP protection and support for technology and innovation R&D institutes. 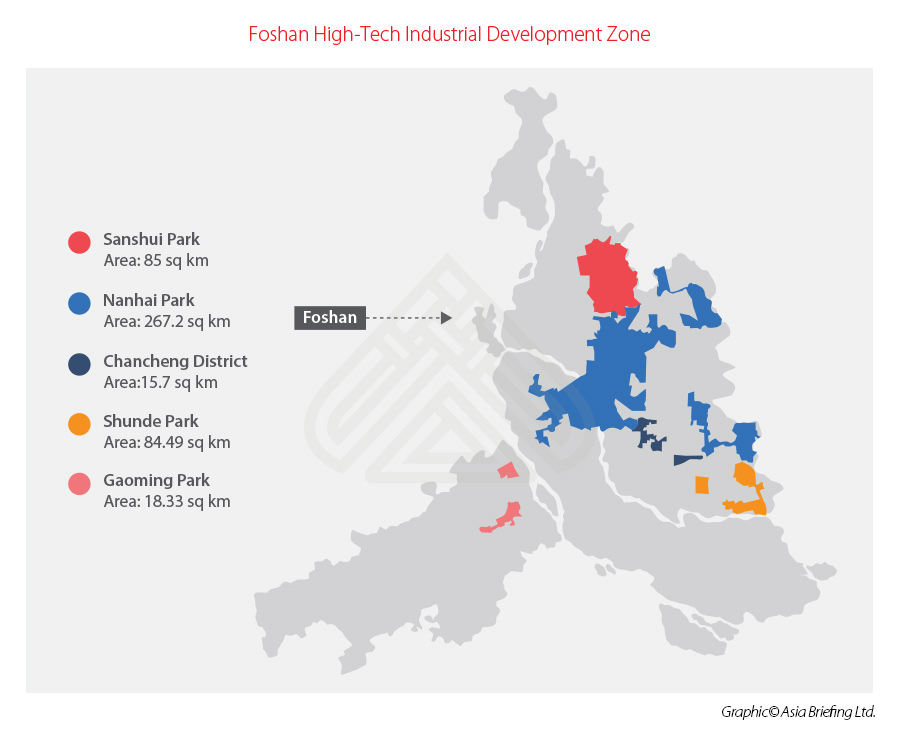 Strategically located along the Guangdong-Guangxi-Guizhou High-speed Railway Economic Belt, the Foshan High-Tech Industrial Development Zone (FHIDZ) enjoys speedy transport links to southwest China and the rest of the PRD. Established in 1992, the zone spans over 470 sq km over five main parks, one in each of Foshan’s districts.

An important manufacturing base for a variety of industries, FHIDZ is a core driver of the local economy and contributed RMB 169.1 billion (US$26.1 billion) to the city’s GDP in 2020. The zone is now transforming into a hotspot for innovation and start-ups thanks to policy incentives and financial support. It is also diversifying its focus from mainstay industries, such as electronics and automotive parts manufacturing, to high-tech and emerging industries that range from biomedicine and intelligent home appliances to optoelectronics and new materials.

Below we provide a brief overview of the five parks within the FHIDZ.

Nanhai Park is the largest park within the FHIDZ by area – with 267.2 sq km of land under its management. The Park fosters a number of traditional industries, most notably automotive parts and electronics manufacturing, but in recent years has invested heavily in emerging and high-tech sectors. This has led to the rise of industrial clusters focusing on research and development of medical devices, biomedicine, new materials, and robotics, to name a few. The Guangdong Financial High-tech Zone is also located within the park.

Covering 84.49 sq km, Shunde Park is a smaller yet important area of the FHIDZ. The park’s namesake district is the wealthiest in Foshan, reporting a GDP of RMB 356.3 billion (US$55.1 billion) in 2020, growing at an average rate of 6.7 percent over the previous five years. The district is now heavily focused on high-tech industries and the digital economy, housing 384 high-tech enterprises and 32 research institutes. New projects in 5G equipment, artificial intelligence, and integrated circuits have also been established in recent years. Country Garden’s Shunde Robot Valley and the Midea-Kuka Smart Manufacturing Industry Park are both located within this park.

Located in the northernmost part of the FHIDZ, Sanshui Park is home to industrial bases focused on automotive parts, display components, automation machinery and equipment manufacturing, medical devices, and photovoltaic technology. The park is actively expanding opportunities for foreign investors, adding Japan and Thailand investment sites in 2019 and even hosting job fairs and roadshows to attract foreign talent and investment. Chinese electronics companies Haier Group and Suning are among major companies that have settled in the area.

Chancheng Park is the smallest area within the FHIDZ, covering just 15.7 sq km. It is nonetheless an important development zone, reporting a local GDP of RMB 14.89 billion (US$2.3 billion) in 2019. The park’s main industries are high-end equipment manufacturing, electronic information, biomedicine, and new energy and materials. Multinationals, such as Andritz AG and Valeo, have presences in the park.

Foshan’s economy has expanded far beyond its reliance on traditional manufacturing industries. In fact, the city is fast becoming a prime example of how traditional sectors can modernize and innovate or how mature industrial hubs can upgrade to higher-tech-led growth.

Foshan’s well-established economy now offers an increasingly diverse investment landscape, opening up more channels to tap into the region’s newfound manufacturing and services strengths and benefit from the digitization of the regional industrial chain.

Finally, by opening up more industries to foreign investors and providing favorable policy and financial incentives, Foshan is sending a clear signal – cooperation with foreign companies and investors will help it realize its ambition of becoming an efficient and high-tech smart manufacturing powerhouse.