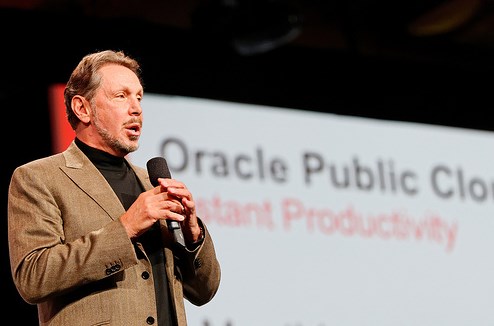 In the age of software-based corporations, few companies can match Oracle. Only Microsoft and IBM earn more software revenue than it. Since the company's founding in 1977, it's evolved from humble origins in relational databases to a dominant force in the cloud software marketplace. Here's a guide on what the evolution of Oracle says about the future of the cloud.

During the early 1990s, Oracle co-founder Larry Ellison recognized the potential of relational databases. He and two of his friends built the infrastructure that would become Oracle Database. It is one of the most powerful and popular database applications ever created. The product also continues to dominate in terms of database worldwide market share.

In 2008, Oracle updated its mission statement to reflect the changing nature of the internet. Those in key positions within Oracle's leadership plotted a strategy to embrace cloud technology. During 2011, Oracle Fusion Applications moved into the cloud. This suite of applications performs many tasks complementary to Oracle Database duties. It's a robust feature-set that services industries as widespread as logistics, governance, and finance. Cloud technologies empower Oracle to offer real-time, multi-user access to massive databases.

Oracle Fusion Applications didn't replace Oracle's most popular software products. Instead, this suite augments the flagship line of applications using cloud capabilities. The corporation has moved toward Software as a Service (SaaS).

With Fusion Applications, the SaaS strategy encourages users, generally other corporations, to evaluate their software usage in five ways. They should seek cloud applications that are complete. Products with full functionality reduce the need to divide work across multiple products, which is an inconvenience.

Data-driven and personalized cloud applications include live analytics that can inform businesses about the best ways to maximize revenue. Similarly, they're personalized so that each company can identify its own business goals.

The fourth and fifth important areas for corporate software usage are connectivity and security. The former platform encourages companies to position employees such that anyone can connect with any other person, data point, or process instantly. Security is the safeguarding technology that protects all data from outside intrusion. Fusion Applications deftly tie together these five SaaS features in a single software suite.

Oracle isn't content to rest on their laurels. Its currently building infrastructure for the future of the cloud. To achieve this goal, it's simultaneously reimagining its past. Oracle Database 12c continues the lineage of the company's flagship product. It's also the company's best seller. Oracle has incentive to maintain Oracle Database's market dominance.

Oracle's strategy to accomplish this is the Cloud Plan. Oracle wants to craft a cloud framework that tethers the business concepts of Oracle Fusion Applications with the familiar concepts of Oracle Database. The future of Oracle involves cloud agility, the ability to provide rapid response to any resource request. Whether a user requires more storage or new user access, agile cloud software can satisfy the request in seconds. By doing so, Oracle Database becomes more powerful than ever.

To survive for several decades, Oracle has evolved from their humble beginnings. Today, they are harnessing the power of the cloud to deliver some of the best SaaS software in the marketplace.