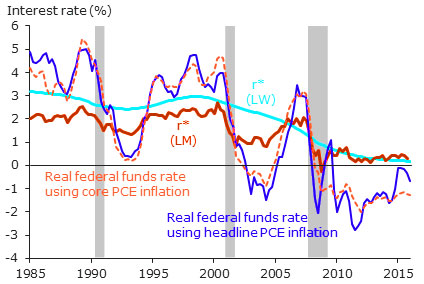 As an important milestone of monetary policy, natural rate of interest is following use of resources and steady inflation next to FED aimed level. Current predictions shows that as soon as GDP returns to normal, long term potential zero rate will grow in following years.

Doubts are growing since December 2015 when FED increased rate causing discussions how much rates should be grown.

General models of economic predictions shows that r* is in correlation with households relation between savings and consumption and prediction of growth rate of GDP potential.

Both elements cannot observed directly, which means that r* must be calculated from variables as such as nominal interest rates, inflation, and real GDP growth.

Reasonable differences with these two models of r* predictions are not so much statistically important as fact that they are correlated with declines in real interest rates observed over the same period .

As important input for monetary policy decisions r* predictions, making federal funds rate too high  to r* for extended period could contribute that GDP growth goes below potential, and to build up financial imbalances that could make U.S. economy vulnerable to crisis.

Some economist argued because “loose” monetary policy between 2001 and 2006 when federal funds rate stayed below r-star triggered rise of prices of U.S. houses and mortgage debt what at the end caused crisis and recession.

As we know lower predictions of r-star partly causing  lower potential output growth (y-star) and low growth of GDP  is frustrating policymakers which predicted considerable progress on the labor market has made since the crisis-era lows six years ago.

San Francisco FED Executive John Williams, announced that central banks simply don't have enough space to cut interest rates because they are already too low. As we know cutting interest rates is basic weapon of central bank fighting with crisis and recession.

CBO current projections of long-run growth rate for potential GDP are 2% and that could imply r* value of 1% . If we accept those projections as accurate then we could expect that monetary policy will follow rise in r*, and could  lead to normalization of FEDs rate.

This post is a contribution by Daniel Quinn from InvestmentTraining.org